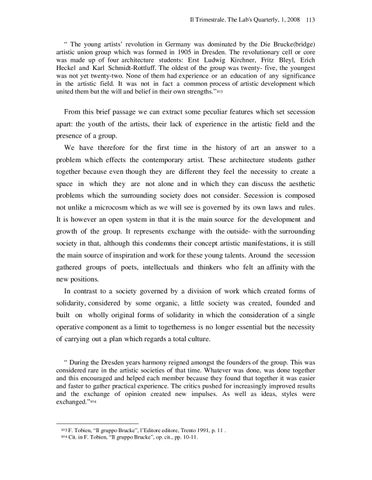 “ The young artists’ revolution in Germany was dominated by the Die Brucke(bridge) artistic union group which was formed in 1905 in Dresden. The revolutionary cell or core was made up of four architecture students: Erst Ludwig Kirchner, Fritz Bleyl, Erich Heckel and Karl Schmidt-Rottluff. The oldest of the group was twenty- five, the youngest was not yet twenty-two. None of them had experience or an education of any significance in the artistic field. It was not in fact a common process of artistic development which united them but the will and belief in their own strengths.”103

From this brief passage we can extract some peculiar features which set secession apart: the youth of the artists, their lack of experience in the artistic field and the presence of a group. We have therefore for the first time in the history of art an answer to a problem which effects the contemporary artist. These architecture students gather together because even though they are different they feel the necessity to create a space in which they are not alone and in which they can discuss the aesthetic problems which the surrounding society does not consider. Secession is composed not unlike a microcosm which as we will see is governed by its own laws and rules. It is however an open system in that it is the main source for the development and growth of the group. It represents exchange with the outside- with the surrounding society in that, although this condemns their concept artistic manifestations, it is still the main source of inspiration and work for these young talents. Around the secession gathered groups of poets, intellectuals and thinkers who felt an affinity with the new positions. In contrast to a society governed by a division of work which created forms of solidarity, considered by some organic, a little society was created, founded and built on wholly original forms of solidarity in which the consideration of a single operative component as a limit to togetherness is no longer essential but the necessity of carrying out a plan which regards a total culture. “ During the Dresden years harmony reigned amongst the founders of the group. This was considered rare in the artistic societies of that time. Whatever was done, was done together and this encouraged and helped each member because they found that together it was easier and faster to gather practical experience. The critics pushed for increasingly improved results and the exchange of opinion created new impulses. As well as ideas, styles were exchanged.”104