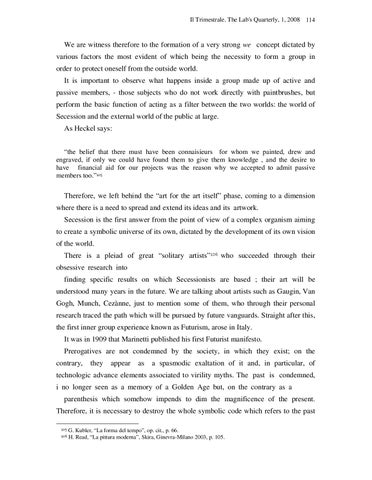 We are witness therefore to the formation of a very strong we concept dictated by various factors the most evident of which being the necessity to form a group in order to protect oneself from the outside world. It is important to observe what happens inside a group made up of active and passive members, - those subjects who do not work directly with paintbrushes, but perform the basic function of acting as a filter between the two worlds: the world of Secession and the external world of the public at large. As Heckel says: “the belief that there must have been connaisieurs for whom we painted, drew and engraved, if only we could have found them to give them knowledge , and the desire to have financial aid for our projects was the reason why we accepted to admit passive members too.”105

Therefore, we left behind the “art for the art itself” phase, coming to a dimension where there is a need to spread and extend its ideas and its artwork. Secession is the first answer from the point of view of a complex organism aiming to create a symbolic universe of its own, dictated by the development of its own vision of the world. There is a pleiad of great “solitary artists”106 who succeeded through their obsessive research into finding specific results on which Secessionists are based ; their art will be understood many years in the future. We are talking about artists such as Gaugin, Van Gogh, Munch, Cezànne, just to mention some of them, who through their personal research traced the path which will be pursued by future vanguards. Straight after this, the first inner group experience known as Futurism, arose in Italy. It was in 1909 that Marinetti published his first Futurist manifesto. Prerogatives are not condemned by the society, in which they exist; on the contrary,

a spasmodic exaltation of it and, in particular, of

technologic advance elements associated to virility myths. The past is condemned, i no longer seen as a memory of a Golden Age but, on the contrary as a parenthesis which somehow impends to dim the magnificence of the present. Therefore, it is necessary to destroy the whole symbolic code which refers to the past 105 106