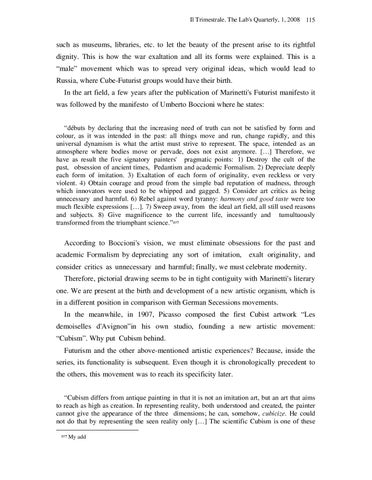 such as museums, libraries, etc. to let the beauty of the present arise to its rightful dignity. This is how the war exaltation and all its forms were explained. This is a “male” movement which was to spread very original ideas, which would lead to Russia, where Cube-Futurist groups would have their birth. In the art field, a few years after the publication of Marinetti&#39;s Futurist manifesto it was followed by the manifesto of Umberto Boccioni where he states: “débuts by declaring that the increasing need of truth can not be satisfied by form and colour, as it was intended in the past: all things move and run, change rapidly, and this universal dynamism is what the artist must strive to represent. The space, intended as an atmosphere where bodies move or pervade, does not exist anymore. […] Therefore, we have as result the five signatory painters&#39; pragmatic points: 1) Destroy the cult of the past, obsession of ancient times, Pedantism and academic Formalism. 2) Depreciate deeply each form of imitation. 3) Exaltation of each form of originality, even reckless or very violent. 4) Obtain courage and proud from the simple bad reputation of madness, through which innovators were used to be whipped and gagged. 5) Consider art critics as being unnecessary and harmful. 6) Rebel against word tyranny: harmony and good taste were too much flexible expressions […]. 7) Sweep away, from the ideal art field, all still used reasons and subjects. 8) Give magnificence to the current life, incessantly and tumultuously transformed from the triumphant science.”107

According to Boccioni&#39;s vision, we must eliminate obsessions for the past and academic Formalism by depreciating any sort of imitation,

consider critics as unnecessary and harmful; finally, we must celebrate modernity. Therefore, pictorial drawing seems to be in tight contiguity with Marinetti&#39;s literary one. We are present at the birth and development of a new artistic organism, which is in a different position in comparison with German Secessions movements. In the meanwhile, in 1907, Picasso composed the first Cubist artwork “Les demoiselles d&#39;Avignon”in his own studio, founding a new artistic movement: “Cubism”. Why put Cubism behind. Futurism and the other above-mentioned artistic experiences? Because, inside the series, its functionality is subsequent. Even though it is chronologically precedent to the others, this movement was to reach its specificity later. “Cubism differs from antique painting in that it is not an imitation art, but an art that aims to reach as high as creation. In representing reality, both understood and created, the painter cannot give the appearance of the three dimensions; he can, somehow, cubicize. He could not do that by representing the seen reality only […] The scientific Cubism is one of these 107