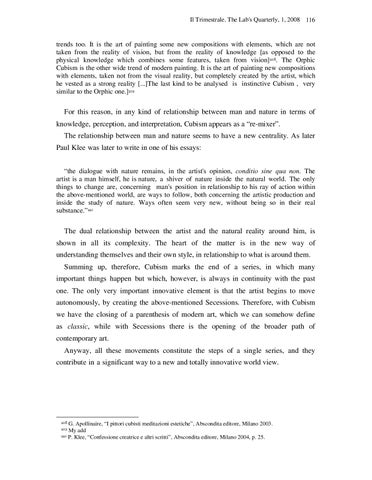 trends too. It is the art of painting some new compositions with elements, which are not taken from the reality of vision, but from the reality of knowledge [as opposed to the physical knowledge which combines some features, taken from vision]108. The Orphic Cubism is the other wide trend of modern painting. It is the art of painting new compositions with elements, taken not from the visual reality, but completely created by the artist, which he vested as a strong reality [...]The last kind to be analysed is instinctive Cubism , very similar to the Orphic one.]109

For this reason, in any kind of relationship between man and nature in terms of knowledge, perception, and interpretation, Cubism appears as a “re-mixer”. The relationship between man and nature seems to have a new centrality. As later Paul Klee was later to write in one of his essays: “the dialogue with nature remains, in the artist&#39;s opinion, conditio sine qua non. The artist is a man himself, he is nature, a shiver of nature inside the natural world. The only things to change are, concerning man&#39;s position in relationship to his ray of action within the above-mentioned world, are ways to follow, both concerning the artistic production and inside the study of nature. Ways often seem very new, without being so in their real substance.”110

The dual relationship between the artist and the natural reality around him, is shown in all its complexity. The heart of the matter is in the new way of understanding themselves and their own style, in relationship to what is around them. Summing up, therefore, Cubism marks the end of a series, in which many important things happen but which, however, is always in continuity with the past one. The only very important innovative element is that the artist begins to move autonomously, by creating the above-mentioned Secessions. Therefore, with Cubism we have the closing of a parenthesis of modern art, which we can somehow define as classic, while with Secessions there is the opening of the broader path of contemporary art. Anyway, all these movements constitute the steps of a single series, and they contribute in a significant way to a new and totally innovative world view.