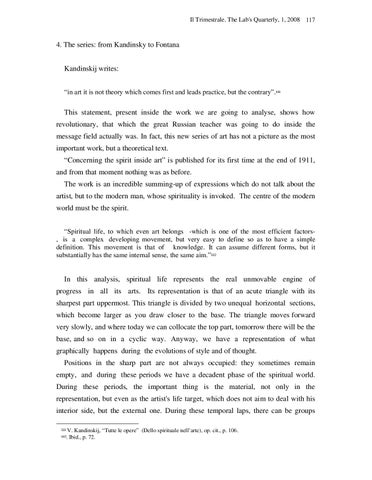 4. The series: from Kandinsky to Fontana Kandinskij writes: “in art it is not theory which comes first and leads practice, but the contrary”.111

This statement, present inside the work we are going to analyse, shows how revolutionary, that which the great Russian teacher was going to do inside the message field actually was. In fact, this new series of art has not a picture as the most important work, but a theoretical text. “Concerning the spirit inside art” is published for its first time at the end of 1911, and from that moment nothing was as before. The work is an incredible summing-up of expressions which do not talk about the artist, but to the modern man, whose spirituality is invoked. The centre of the modern world must be the spirit. “Spiritual life, to which even art belongs -which is one of the most efficient factors, is a complex developing movement, but very easy to define so as to have a simple definition. This movement is that of knowledge. It can assume different forms, but it substantially has the same internal sense, the same aim.”112

In this analysis, spiritual life represents the real unmovable engine of progress in all its arts. Its representation is that of an acute triangle with its sharpest part uppermost. This triangle is divided by two unequal horizontal sections, which become larger as you draw closer to the base. The triangle moves forward very slowly, and where today we can collocate the top part, tomorrow there will be the base, and so on in a cyclic way. Anyway, we have a representation of what graphically happens during the evolutions of style and of thought. Positions in the sharp part are not always occupied: they sometimes remain empty, and during these periods we have a decadent phase of the spiritual world. During these periods, the important thing is the material, not only in the representation, but even as the artist&#39;s life target, which does not aim to deal with his interior side, but the external one. During these temporal laps, there can be groups 111