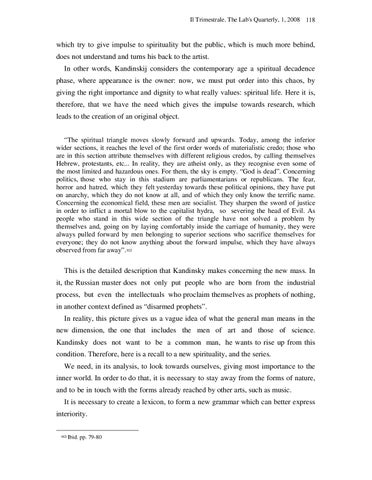 which try to give impulse to spirituality but the public, which is much more behind, does not understand and turns his back to the artist. In other words, Kandinskij considers the contemporary age a spiritual decadence phase, where appearance is the owner: now, we must put order into this chaos, by giving the right importance and dignity to what really values: spiritual life. Here it is, therefore, that we have the need which gives the impulse towards research, which leads to the creation of an original object. “The spiritual triangle moves slowly forward and upwards. Today, among the inferior wider sections, it reaches the level of the first order words of materialistic credo; those who are in this section attribute themselves with different religious credos, by calling themselves Hebrew, protestants, etc... In reality, they are atheist only, as they recognise even some of the most limited and hazardous ones. For them, the sky is empty. “God is dead”. Concerning politics, those who stay in this stadium are parliamentarians or republicans. The fear, horror and hatred, which they felt yesterday towards these political opinions, they have put on anarchy, which they do not know at all, and of which they only know the terrific name. Concerning the economical field, these men are socialist. They sharpen the sword of justice in order to inflict a mortal blow to the capitalist hydra, so severing the head of Evil. As people who stand in this wide section of the triangle have not solved a problem by themselves and, going on by laying comfortably inside the carriage of humanity, they were always pulled forward by men belonging to superior sections who sacrifice themselves for everyone; they do not know anything about the forward impulse, which they have always observed from far away”.113

This is the detailed description that Kandinsky makes concerning the new mass. In it, the Russian master does not only put people who are born from the industrial process, but even the intellectuals who proclaim themselves as prophets of nothing, in another context defined as “disarmed prophets”. In reality, this picture gives us a vague idea of what the general man means in the new dimension, the one that includes the men of art and those of science. Kandinsky does not want to be a common man, he wants to rise up from this condition. Therefore, here is a recall to a new spirituality, and the series. We need, in its analysis, to look towards ourselves, giving most importance to the inner world. In order to do that, it is necessary to stay away from the forms of nature, and to be in touch with the forms already reached by other arts, such as music. It is necessary to create a lexicon, to form a new grammar which can better express interiority. 113