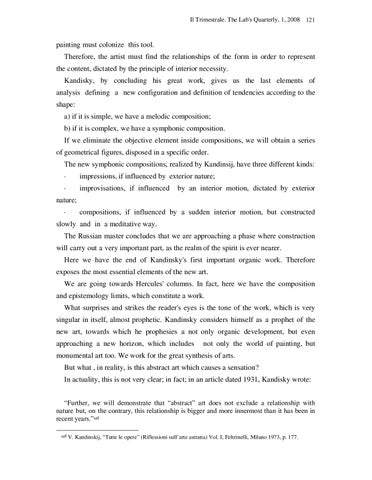 painting must colonize this tool. Therefore, the artist must find the relationships of the form in order to represent the content, dictated by the principle of interior necessity. Kandisky, by concluding his great work, gives us the last elements of analysis defining a new configuration and definition of tendencies according to the shape: a) if it is simple, we have a melodic composition; b) if it is complex, we have a symphonic composition. If we eliminate the objective element inside compositions, we will obtain a series of geometrical figures, disposed in a specific order. The new symphonic compositions, realized by Kandinsij, have three different kinds: -

impressions, if influenced by exterior nature;

by an interior motion, dictated by exterior

compositions, if influenced by a sudden interior motion, but constructed

slowly and in a meditative way. The Russian master concludes that we are approaching a phase where construction will carry out a very important part, as the realm of the spirit is ever nearer. Here we have the end of Kandinsky&#39;s first important organic work. Therefore exposes the most essential elements of the new art. We are going towards Hercules&#39; columns. In fact, here we have the composition and epistemology limits, which constitute a work. What surprises and strikes the reader&#39;s eyes is the tone of the work, which is very singular in itself, almost prophetic. Kandinsky considers himself as a prophet of the new art, towards which he prophesies a not only organic development, but even approaching a new horizon, which includes

not only the world of painting, but

monumental art too. We work for the great synthesis of arts. But what , in reality, is this abstract art which causes a sensation? In actuality, this is not very clear; in fact; in an article dated 1931, Kandisky wrote: “Further, we will demonstrate that “abstract” art does not exclude a relationship with nature but, on the contrary, this relationship is bigger and more innermost than it has been in recent years.”118 118