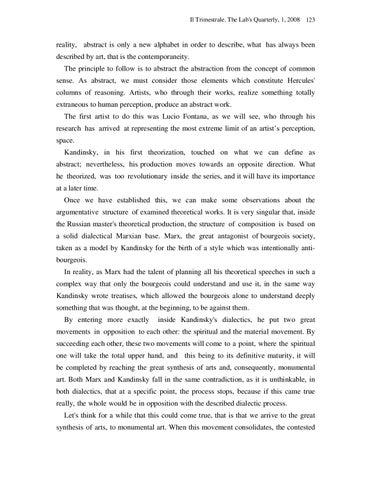 reality, abstract is only a new alphabet in order to describe, what has always been described by art, that is the contemporaneity. The principle to follow is to abstract the abstraction from the concept of common sense. As abstract, we must consider those elements which constitute Hercules&#39; columns of reasoning. Artists, who through their works, realize something totally extraneous to human perception, produce an abstract work. The first artist to do this was Lucio Fontana, as we will see, who through his research has arrived at representing the most extreme limit of an artistâ&amp;#x20AC;&amp;#x2122;s perception, space. Kandinsky, in his first theorization, touched on what we can define as abstract; nevertheless, his production moves towards an opposite direction. What he theorized, was too revolutionary inside the series, and it will have its importance at a later time. Once we have established this, we can make some observations about the argumentative structure of examined theoretical works. It is very singular that, inside the Russian master&#39;s theoretical production, the structure of composition is based on a solid dialectical Marxian base. Marx, the great antagonist of bourgeois society, taken as a model by Kandinsky for the birth of a style which was intentionally antibourgeois. In reality, as Marx had the talent of planning all his theoretical speeches in such a complex way that only the bourgeois could understand and use it, in the same way Kandinsky wrote treatises, which allowed the bourgeois alone to understand deeply something that was thought, at the beginning, to be against them. By entering more exactly

movements in opposition to each other: the spiritual and the material movement. By succeeding each other, these two movements will come to a point, where the spiritual one will take the total upper hand, and this being to its definitive maturity, it will be completed by reaching the great synthesis of arts and, consequently, monumental art. Both Marx and Kandinsky fall in the same contradiction, as it is unthinkable, in both dialectics, that at a specific point, the process stops, because if this came true really, the whole would be in opposition with the described dialectic process. Let&#39;s think for a while that this could come true, that is that we arrive to the great synthesis of arts, to monumental art. When this movement consolidates, the contested