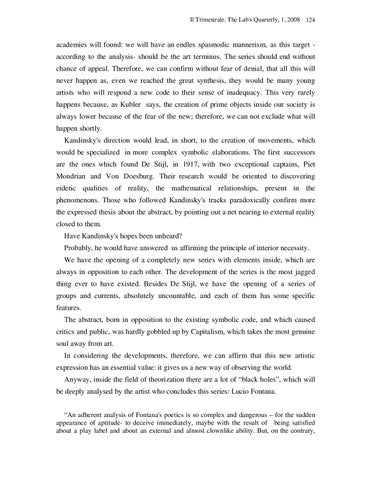 academies will found: we will have an endles spasmodic mannerism, as this target according to the analysis- should be the art terminus. The series should end without chance of appeal. Therefore, we can confirm without fear of denial, that all this will never happen as, even we reached the great synthesis, they would be many young artists who will respond a new code to their sense of inadequacy. This very rarely happens because, as Kubler says, the creation of prime objects inside our society is always lower because of the fear of the new; therefore, we can not exclude what will happen shortly. Kandinsky&#39;s direction would lead, in short, to the creation of movements, which would be specialized in more complex symbolic elaborations. The first successors are the ones which found De Stijl, in 1917, with two exceptional captains, Piet Mondrian and Von Doesburg. Their research would be oriented to discovering eidetic qualities of reality, the mathematical relationships, present in the phenomenons. Those who followed Kandinsky&#39;s tracks paradoxically confirm more the expressed thesis about the abstract, by pointing out a net nearing to external reality closed to them. Have Kandinsky&#39;s hopes been unheard? Probably, he would have answered us affirming the principle of interior necessity. We have the opening of a completely new series with elements inside, which are always in opposition to each other. The development of the series is the most jagged thing ever to have existed. Besides De Stijl, we have the opening of a series of groups and currents, absolutely uncountable, and each of them has some specific features. The abstract, born in opposition to the existing symbolic code, and which caused critics and public, was hardly gobbled up by Capitalism, which takes the most genuine soul away from art. In considering the developments, therefore, we can affirm that this new artistic expression has an essential value: it gives us a new way of observing the world. Anyway, inside the field of theorization there are a lot of “black holes”, which will be deeply analysed by the artist who concludes this series: Lucio Fontana. “An adherent analysis of Fontana&#39;s poetics is so complex and dangerous – for the sudden appearance of aptitude- to deceive immediately, maybe with the result of being satisfied about a play label and about an external and almost clownlike ability. But, on the contrary,