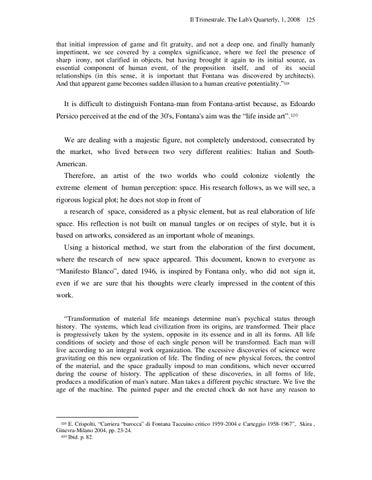 that initial impression of game and fit gratuity, and not a deep one, and finally humanly impertinent, we see covered by a complex significance, where we feel the presence of sharp irony, not clarified in objects, but having brought it again to its initial source, as essential component of human event, of the proposition itself, and of its social relationships (in this sense, it is important that Fontana was discovered by architects). And that apparent game becomes sudden illusion to a human creative potentiality.”119

It is difficult to distinguish Fontana-man from Fontana-artist because, as Edoardo Persico perceived at the end of the 30&#39;s, Fontana&#39;s aim was the “life inside art”.120 We are dealing with a majestic figure, not completely understood, consecrated by the market, who lived between two very different realities: Italian and SouthAmerican. Therefore, an artist of the two worlds who could colonize violently the extreme element of human perception: space. His research follows, as we will see, a rigorous logical plot; he does not stop in front of a research of space, considered as a physic element, but as real elaboration of life space. His reflection is not built on manual tangles or on recipes of style, but it is based on artworks, considered as an important whole of meanings. Using a historical method, we start from the elaboration of the first document, where the research of new space appeared. This document, known to everyone as “Manifesto Blanco”, dated 1946, is inspired by Fontana only, who did not sign it, even if we are sure that his thoughts were clearly impressed in the content of this work. “Transformation of material life meanings determine man&#39;s psychical status through history. The systems, which lead civilization from its origins, are transformed. Their place is progressively taken by the system, opposite in its essence and in all its forms. All life conditions of society and those of each single person will be transformed. Each man will live according to an integral work organization. The excessive discoveries of science were gravitating on this new organization of life. The finding of new physical forces, the control of the material, and the space gradually imposd to man conditions, which never occurred during the course of history. The application of these discoveries, in all forms of life, produces a modification of man&#39;s nature. Man takes a different psychic structure. We live the age of the machine. The painted paper and the erected chock do not have any reason to