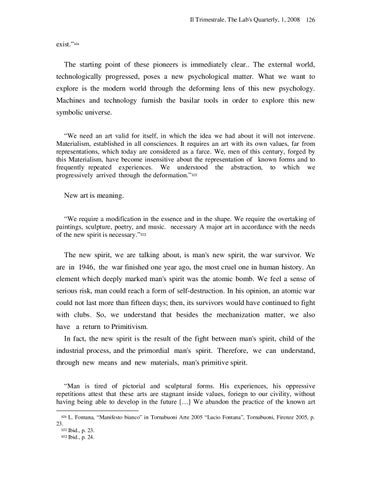 The starting point of these pioneers is immediately clear.. The external world, technologically progressed, poses a new psychological matter. What we want to explore is the modern world through the deforming lens of this new psychology. Machines and technology furnish the basilar tools in order to explore this new symbolic universe. “We need an art valid for itself, in which the idea we had about it will not intervene. Materialism, established in all consciences. It requires an art with its own values, far from representations, which today are considered as a farce. We, men of this century, forged by this Materialism, have become insensitive about the representation of known forms and to frequently repeated experiences. We understood the abstraction, to which we progressively arrived through the deformation.”122

New art is meaning. “We require a modification in the essence and in the shape. We require the overtaking of paintings, sculpture, poetry, and music. necessary A major art in accordance with the needs of the new spirit is necessary.”123

The new spirit, we are talking about, is man&#39;s new spirit, the war survivor. We are in 1946, the war finished one year ago, the most cruel one in human history. An element which deeply marked man&#39;s spirit was the atomic bomb. We feel a sense of serious risk, man could reach a form of self-destruction. In his opinion, an atomic war could not last more than fifteen days; then, its survivors would have continued to fight with clubs. So, we understand that besides the mechanization matter, we also have a return to Primitivism. In fact, the new spirit is the result of the fight between man&#39;s spirit, child of the industrial process, and the primordial man&#39;s spirit. Therefore, we can understand, through new means and new materials, man&#39;s primitive spirit. “Man is tired of pictorial and sculptural forms. His experiences, his oppressive repetitions attest that these arts are stagnant inside values, foriegn to our civility, without having being able to develop in the future […] We abandon the practice of the known art 121