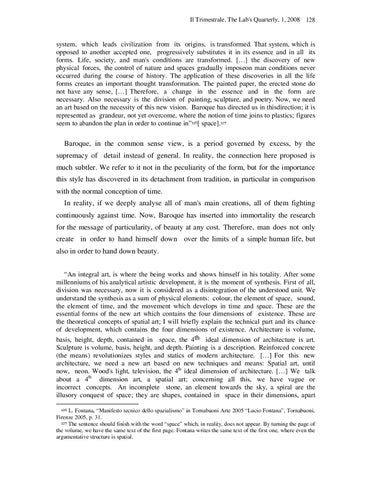 system, which leads civilization from its origins, is transformed. That system, which is opposed to another accepted one, progressively substitutes it in its essence and in all its forms. Life, society, and man&#39;s conditions are transformed. […] the discovery of new physical forces, the control of nature and spaces gradually imposeon man conditions never occurred during the course of history. The application of these discoveries in all the life forms creates an important thought transformation. The painted paper, the erected stone do not have any sense, […] Therefore, a change in the essence and in the form are necessary. Also necessary is the division of painting, sculpture, and poetry. Now, we need an art based on the necessity of this new vision. Baroque has directed us in thisdirection; it is represented as grandeur, not yet overcome, where the notion of time joins to plastics; figures seem to abandon the plan in order to continue in”126[ space].127

Baroque, in the common sense view, is a period governed by excess, by the supremacy of detail instead of general. In reality, the connection here proposed is much subtler. We refer to it not in the peculiarity of the form, but for the importance this style has discovered in its detachment from tradition, in particular in comparison with the normal conception of time. In reality, if we deeply analyse all of man&#39;s main creations, all of them fighting continuously against time. Now, Baroque has inserted into immortality the research for the message of particularity, of beauty at any cost. Therefore, man does not only create in order to hand himself down over the limits of a simple human life, but also in order to hand down beauty. “An integral art, is where the being works and shows himself in his totality. After some millenniums of his analytical artistic development, it is the moment of synthesis. First of all, division was necessary, now it is considered as a disintegration of the understood unit. We understand the synthesis as a sum of physical elements: colour, the element of space, sound, the element of time, and the movement which develops in time and space. These are the essential forms of the new art which contains the four dimensions of existence. These are the theoretical concepts of spatial art; I will briefly explain the technical part and its chance of development, which contains the four dimensions of existence. Architecture is volume, basis, height, depth, contained in space, the 4th ideal dimension of architecture is art. Sculpture is volume, basis, height, and depth. Painting is a description. Reinforced concrete (the means) revolutionizes styles and statics of modern architecture. […] For this new architecture, we need a new art based on new techniques and means: Spatial art, until now, neon. Wood&#39;s light, television, the 4th ideal dimension of architecture. […] We talk about a 4th dimension art, a spatial art; concerning all this, we have vague or incorrect concepts. An incomplete stone, an element towards the sky, a spiral are the illusory conquest of space; they are shapes, contained in space in their dimensions, apart 126 L. Fontana, “Manifesto tecnico dello spazialismo” in Tornabuoni Arte 2005 “Lucio Fontana”, Tornabuoni, Firenze 2005, p. 31. 127 The sentence should finish with the word “space” which, in reality, does not appear. By turning the page of the volume, we have the same text of the first page. Fontana writes the same text of the first one, where even the argumentative structure is spatial.