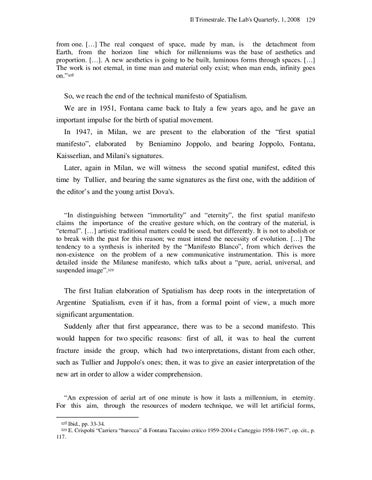 from one. […] The real conquest of space, made by man, is the detachment from Earth, from the horizon line which for millenniums was the base of aesthetics and proportion. […]. A new aesthetics is going to be built, luminous forms through spaces. […] The work is not eternal, in time man and material only exist; when man ends, infinity goes on.”128

So, we reach the end of the technical manifesto of Spatialism. We are in 1951, Fontana came back to Italy a few years ago, and he gave an important impulse for the birth of spatial movement. In 1947, in Milan, we are present to the elaboration of the “first spatial manifesto”, elaborated

Kaisserlian, and Milani&#39;s signatures. Later, again in Milan, we will witness the second spatial manifest, edited this time by Tullier, and bearing the same signatures as the first one, with the addition of the editor’s and the young artist Dova&#39;s. “In distinguishing between “immortality” and “eternity”, the first spatial manifesto claims the importance of the creative gesture which, on the contrary of the material, is “eternal”. […] artistic traditional matters could be used, but differently. It is not to abolish or to break with the past for this reason; we must intend the necessity of evolution. […] The tendency to a synthesis is inherited by the “Manifesto Blanco”, from which derives the non-existence on the problem of a new communicative instrumentation. This is more detailed inside the Milanese manifesto, which talks about a “pure, aerial, universal, and suspended image”.129

The first Italian elaboration of Spatialism has deep roots in the interpretation of Argentine Spatialism, even if it has, from a formal point of view, a much more significant argumentation. Suddenly after that first appearance, there was to be a second manifesto. This would happen for two specific reasons: first of all, it was to heal the current fracture inside the group, which had two interpretations, distant from each other, such as Tullier and Juppolo&#39;s ones; then, it was to give an easier interpretation of the new art in order to allow a wider comprehension. “An expression of aerial art of one minute is how it lasts a millennium, in eternity. For this aim, through the resources of modern technique, we will let artificial forms, 128 129