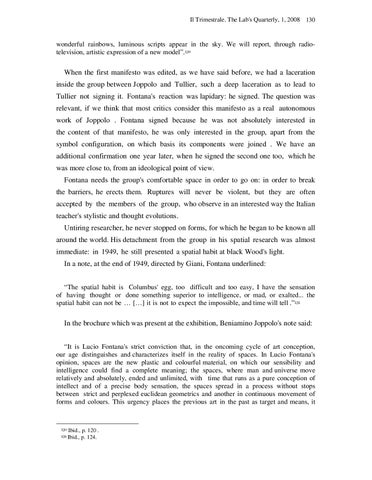 wonderful rainbows, luminous scripts appear in the sky. We will report, through radiotelevision, artistic expression of a new model”.130

When the first manifesto was edited, as we have said before, we had a laceration inside the group between Joppolo and Tullier, such a deep laceration as to lead to Tullier not signing it. Fontana&#39;s reaction was lapidary: he signed. The question was relevant, if we think that most critics consider this manifesto as a real autonomous work of Joppolo . Fontana signed because he was not absolutely interested in the content of that manifesto, he was only interested in the group, apart from the symbol configuration, on which basis its components were joined . We have an additional confirmation one year later, when he signed the second one too, which he was more close to, from an ideological point of view. Fontana needs the group&#39;s comfortable space in order to go on: in order to break the barriers, he erects them. Ruptures will never be violent, but they are often accepted by the members of the group, who observe in an interested way the Italian teacher&#39;s stylistic and thought evolutions. Untiring researcher, he never stopped on forms, for which he began to be known all around the world. His detachment from the group in his spatial research was almost immediate: in 1949, he still presented a spatial habit at black Wood&#39;s light. In a note, at the end of 1949, directed by Giani, Fontana underlined: “The spatial habit is Columbus&#39; egg, too difficult and too easy, I have the sensation of having thought or done something superior to intelligence, or mad, or exalted... the spatial habit can not be … […] it is not to expect the impossible, and time will tell .”131

In the brochure which was present at the exhibition, Beniamino Joppolo&#39;s note said: “It is Lucio Fontana&#39;s strict conviction that, in the oncoming cycle of art conception, our age distinguishes and characterizes itself in the reality of spaces. In Lucio Fontana&#39;s opinion, spaces are the new plastic and colourful material, on which our sensibility and intelligence could find a complete meaning; the spaces, where man and universe move relatively and absolutely, ended and unlimited, with time that runs as a pure conception of intellect and of a precise body sensation, the spaces spread in a process without stops between strict and perplexed euclidean geometrics and another in continuous movement of forms and colours. This urgency places the previous art in the past as target and means, it