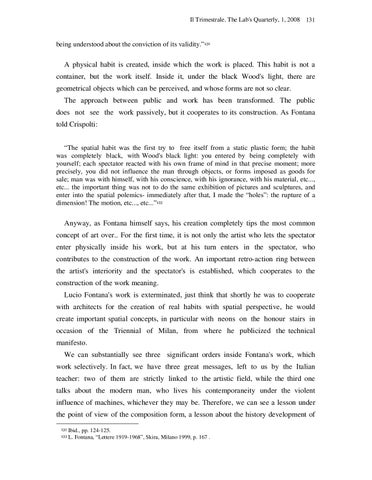 being understood about the conviction of its validity.”132

A physical habit is created, inside which the work is placed. This habit is not a container, but the work itself. Inside it, under the black Wood&#39;s light, there are geometrical objects which can be perceived, and whose forms are not so clear. The approach between public and work has been transformed. The public does not see the work passively, but it cooperates to its construction. As Fontana told Crispolti: “The spatial habit was the first try to free itself from a static plastic form; the habit was completely black, with Wood&#39;s black light: you entered by being completely with yourself; each spectator reacted with his own frame of mind in that precise moment; more precisely, you did not influence the man through objects, or forms imposed as goods for sale; man was with himself, with his conscience, with his ignorance, with his material, etc..., etc... the important thing was not to do the same exhibition of pictures and sculptures, and enter into the spatial polemics- immediately after that, I made the “holes”: the rupture of a dimension! The motion, etc..., etc...”133

Anyway, as Fontana himself says, his creation completely tips the most common concept of art over.. For the first time, it is not only the artist who lets the spectator enter physically inside his work, but at his turn enters in the spectator, who contributes to the construction of the work. An important retro-action ring between the artist&#39;s interiority and the spectator&#39;s is established, which cooperates to the construction of the work meaning. Lucio Fontana&#39;s work is exterminated, just think that shortly he was to cooperate with architects for the creation of real habits with spatial perspective, he would create important spatial concepts, in particular with neons on the honour stairs in occasion of the Triennial of Milan, from where he publicized the technical manifesto. We can substantially see three significant orders inside Fontana&#39;s work, which work selectively. In fact, we have three great messages, left to us by the Italian teacher: two of them are strictly linked to the artistic field, while the third one talks about the modern man, who lives his contemporaneity under the violent influence of machines, whichever they may be. Therefore, we can see a lesson under the point of view of the composition form, a lesson about the history development of 132 133