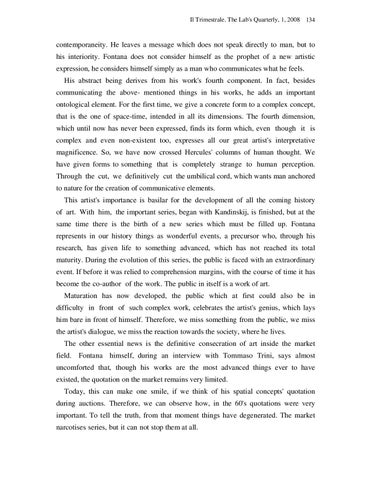 contemporaneity. He leaves a message which does not speak directly to man, but to his interiority. Fontana does not consider himself as the prophet of a new artistic expression, he considers himself simply as a man who communicates what he feels. His abstract being derives from his work&#39;s fourth component. In fact, besides communicating the above- mentioned things in his works, he adds an important ontological element. For the first time, we give a concrete form to a complex concept, that is the one of space-time, intended in all its dimensions. The fourth dimension, which until now has never been expressed, finds its form which, even though it is complex and even non-existent too, expresses all our great artist&#39;s interpretative magnificence. So, we have now crossed Hercules&#39; columns of human thought. We have given forms to something that is completely strange to human perception. Through the cut, we definitively cut the umbilical cord, which wants man anchored to nature for the creation of communicative elements. This artist&#39;s importance is basilar for the development of all the coming history of art. With him, the important series, began with Kandinskij, is finished, but at the same time there is the birth of a new series which must be filled up. Fontana represents in our history things as wonderful events, a precursor who, through his research, has given life to something advanced, which has not reached its total maturity. During the evolution of this series, the public is faced with an extraordinary event. If before it was relied to comprehension margins, with the course of time it has become the co-author of the work. The public in itself is a work of art. Maturation has now developed, the public which at first could also be in difficulty in front of such complex work, celebrates the artist&#39;s genius, which lays him bare in front of himself. Therefore, we miss something from the public, we miss the artist&#39;s dialogue, we miss the reaction towards the society, where he lives. The other essential news is the definitive consecration of art inside the market field. Fontana himself, during an interview with Tommaso Trini, says almost uncomforted that, though his works are the most advanced things ever to have existed, the quotation on the market remains very limited. Today, this can make one smile, if we think of his spatial concepts&#39; quotation during auctions. Therefore, we can observe how, in the 60&#39;s quotations were very important. To tell the truth, from that moment things have degenerated. The market narcotises series, but it can not stop them at all.