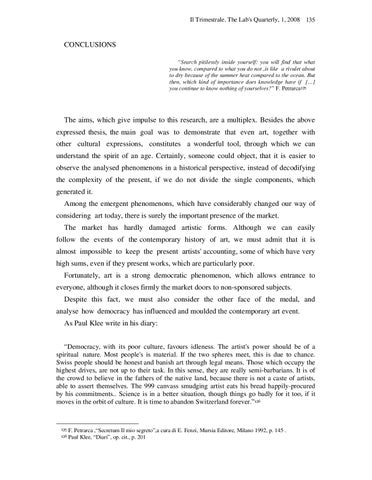 CONCLUSIONS “Search pitilessly inside yourself: you will find that what you know, compared to what you do not ,is like a rivulet about to dry because of the summer heat compared to the ocean. But then, which kind of importance does knowledge have if […] you continue to know nothing of yourselves?” F. Petrarca135

The aims, which give impulse to this research, are a multiplex. Besides the above expressed thesis, the main goal was to demonstrate that even art, together with other cultural expressions, constitutes a wonderful tool, through which we can understand the spirit of an age. Certainly, someone could object, that it is easier to observe the analysed phenomenons in a historical perspective, instead of decodifying the complexity of the present, if we do not divide the single components, which generated it. Among the emergent phenomenons, which have considerably changed our way of considering art today, there is surely the important presence of the market. The market has hardly damaged artistic forms. Although we can easily follow the events of the contemporary history of art, we must admit that it is almost impossible to keep the present artists&#39; accounting, some of which have very high sums, even if they present works, which are particularly poor. Fortunately, art is a strong democratic phenomenon, which allows entrance to everyone, although it closes firmly the market doors to non-sponsored subjects. Despite this fact, we must also consider the other face of the medal, and analyse how democracy has influenced and moulded the contemporary art event. As Paul Klee write in his diary: “Democracy, with its poor culture, favours idleness. The artist&#39;s power should be of a spiritual nature. Most people&#39;s is material. If the two spheres meet, this is due to chance. Swiss people should be honest and banish art through legal means. Those which occupy the highest drives, are not up to their task. In this sense, they are really semi-barbarians. It is of the crowd to believe in the fathers of the native land, because there is not a caste of artists, able to assert themselves. The 999 canvass smudging artist eats his bread happily-procured by his commitments.. Science is in a better situation, though things go badly for it too, if it moves in the orbit of culture. It is time to abandon Switzerland forever.”136