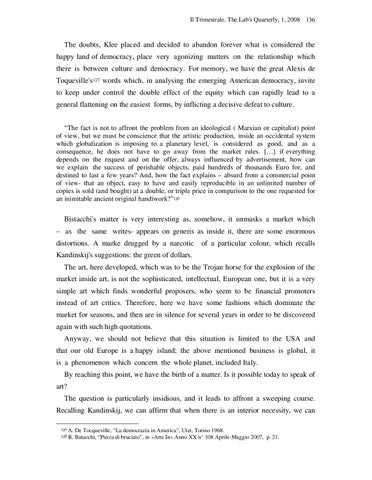 The doubts, Klee placed and decided to abandon forever what is considered the happy land of democracy, place very agonizing matters on the relationship which there is between culture and democracy. For memory, we have the great Alexis de Toqueville&#39;s137 words which, in analysing the emerging American democracy, invite to keep under control the double effect of the equity which can rapidly lead to a general flattening on the easiest forms, by inflicting a decisive defeat to culture. “The fact is not to affront the problem from an ideological ( Marxian or capitalist) point of view, but we must be conscience that the artistic production, inside an occidental system which globalization is imposing to a planetary level, is considered as good, and as a consequence, he does not have to go away from the market rules. […] if everything depends on the request and on the offer, always influenced by advertisement, how can we explain the success of perishable objects, paid hundreds of thousands Euro for, and destined to last a few years? And, how the fact explains – absurd from a commercial point of view- that an object, easy to have and easily reproducible in an unlimited number of copies is sold (and bought) at a double, or triple price in comparison to the one requested for an inimitable ancient original handiwork?”138

Bistacchi&#39;s matter is very interesting as, somehow, it unmasks a market which – as the same writes- appears on generis as inside it, there are some enormous distortions. A marke drugged by a narcotic

of a particular colour, which recalls

Kandinskij&#39;s suggestions: the green of dollars. The art, here developed, which was to be the Trojan horse for the explosion of the market inside art, is not the sophisticated, intellectual, European one, but it is a very simple art which finds wonderful proposers, who seem to be financial promoters instead of art critics. Therefore, here we have some fashions which dominate the market for seasons, and then are in silence for several years in order to be discovered again with such high quotations. Anyway, we should not believe that this situation is limited to the USA and that our old Europe is a happy island; the above mentioned business is global, it is a phenomenon which concern the whole planet, included Italy. By reaching this point, we have the birth of a matter. Is it possible today to speak of art? The question is particularly insidious, and it leads to affront a sweeping course. Recalling Kandinskij, we can affirm that when there is an interior necessity, we can 137 138