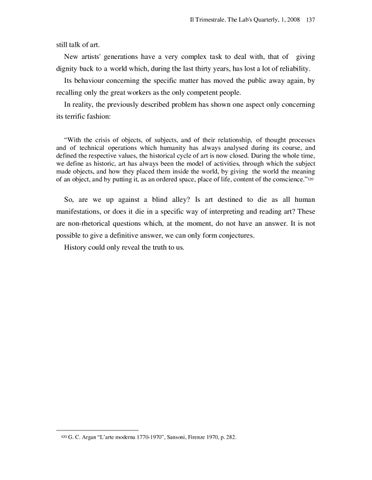 still talk of art. New artists&#39; generations have a very complex task to deal with, that of

dignity back to a world which, during the last thirty years, has lost a lot of reliability. Its behaviour concerning the specific matter has moved the public away again, by recalling only the great workers as the only competent people. In reality, the previously described problem has shown one aspect only concerning its terrific fashion: “With the crisis of objects, of subjects, and of their relationship, of thought processes and of technical operations which humanity has always analysed during its course, and defined the respective values, the historical cycle of art is now closed. During the whole time, we define as historic, art has always been the model of activities, through which the subject made objects, and how they placed them inside the world, by giving the world the meaning of an object, and by putting it, as an ordered space, place of life, content of the conscience.”139

So, are we up against a blind alley? Is art destined to die as all human manifestations, or does it die in a specific way of interpreting and reading art? These are non-rhetorical questions which, at the moment, do not have an answer. It is not possible to give a definitive answer, we can only form conjectures. History could only reveal the truth to us.