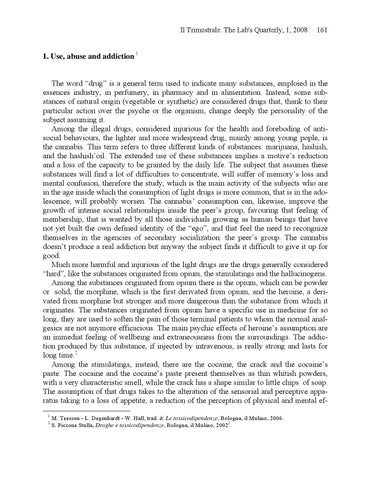 1. Use, abuse and addiction 1 The word “drug” is a general term used to indicate many substances, emploied in the essences industry, in perfumery, in pharmacy and in alimentation. Instead, some substances of natural origin (vegetable or synthetic) are considered drugs that, thank to their particular action over the psyche or the organism, change deeply the personality of the subject assuming it. Among the illegal drugs, considered injurious for the health and foreboding of antisocial behaviours, the lighter and more widespread drug, mainly among young pople, is the cannabis. This term refers to three different kinds of substances: marijuana, hashish, and the hashish’oil. The extended use of these substances implies a motive’s reduction and a loss of the capacity to be granted by the daily life. The subject that assumes these substances will find a lot of difficulties to concentrate, will suffer of memory’s loss and mental confusion, therefore the study, which is the main activity of the subjects who are in the age inside which the consumption of light drugs is more common, that is in the adolescence, will probably worsen. The cannabis’ consumption can, likewise, improve the growth of intense social relationships inside the peer’s group, favouring that feeling of membership, that is wanted by all those individuals growing as human beings that have not yet built the own defined identity of the “ego”, and that feel the need to recongnize themselves in the agencies of secondary socialization: the peer’s group. The cannabis doesn’t produce a real addiction but anyway the subject finds it difficult to give it up for good. Much more harmful and injurious of the light drugs are the drugs generally considered “hard”, like the substances originated from opium, the stimulatings and the hallucinogens. Among the substances originated from opium there is the opium, which can be powder or solid, the morphine, which is the first derivated from opium, and the heroine, a derivated from morphine but stronger and more dangerous than the substance from which it originates. The substances originated from opium have a specific use in medicine for so long, they are used to soften the pain of those terminal patients to whom the normal analgesics are not anymore efficacious. The main psychic effects of heroine’s assumption are an immediat feeling of wellbeing and extraneousness from the surroundings. The addiction produced by this substance, if injected by intravenous, is really strong and lasts for long time.2 Among the stimulatings, instead, there are the cocaine, the crack and the cocaine’s paste. The cocaine and the cocaine’s paste present themselves as thin whitish powders, with a very characteristic smell, while the crack has a shape similar to little chips of soap. The assumption of that drugs takes to the alteration of the sensorial and perceptive apparatus taking to a loss of appetite, a reduction of the perception of physical and mental ef1 2