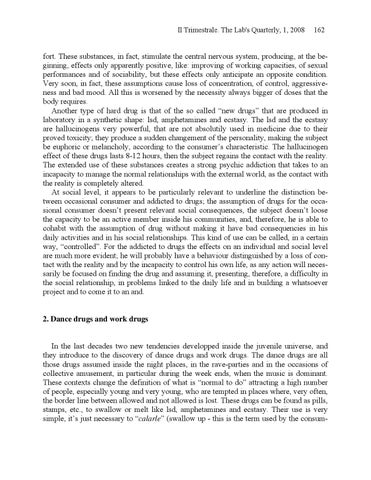 fort. These substances, in fact, stimulate the central nervous system, producing, at the beginning, effects only apparently positive, like: improving of working capacities, of sexual performances and of sociability, but these effects only anticipate an opposite condition. Very soon, in fact, these assumptions cause loss of concentration, of control, aggressiveness and bad mood. All this is worsened by the necessity always bigger of doses that the body requires. Another type of hard drug is that of the so called “new drugs” that are produced in laboratory in a synthetic shape: lsd, amphetamines and ecstasy. The lsd and the ecstasy are hallucinogens very powerful, that are not absolutily used in medicine due to their proved toxicity; they produce a sudden changement of the personality, making the subject be euphoric or melancholy, according to the consumer’s characteristic. The hallucinogen effect of these drugs lasts 8-12 hours, then the subject regains the contact with the reality. The extended use of these substances creates a strong psychic addiction that takes to an incapacity to manage the normal relationships with the external world, as the contact with the reality is completely altered. At social level, it appears to be particularly relevant to underline the distinction between occasional consumer and addicted to drugs; the assumption of drugs for the occasional consumer doesn’t present relevant social consequences, the subject doesn’t loose the capacity to be an active member inside his communities, and, therefore, he is able to cohabit with the assumption of drug without making it have bad consequencies in his daily activities and in his social relationships. This kind of use can be called, in a certain way, “controlled”. For the addicted to drugs the effects on an individual and social level are much more evident; he will probably have a behaviour distinguished by a loss of contact with the reality and by the incapacity to control his own life, as any action will necessarily be focused on finding the drug and assuming it, presenting, therefore, a difficulty in the social relationship, in problems linked to the daily life and in building a whatsoever project and to come it to an and.

2. Dance drugs and work drugs In the last decades two new tendencies developped inside the juvenile universe, and they introduce to the discovery of dance drugs and work drugs. The dance drugs are all those drugs assumed inside the night places, in the rave-parties and in the occasions of collective amusement, in particular during the week ends, when the music is dominant. These contexts change the definition of what is “normal to do” attracting a high number of people, especially young and very young, who are tempted in places where, very often, the border line between allowed and not allowed is lost. These drugs can be found as pills, stamps, etc., to swallow or melt like lsd, amphetamines and ecstasy. Their use is very simple, it’s just necessary to “calarle” (swallow up - this is the term used by the consum-