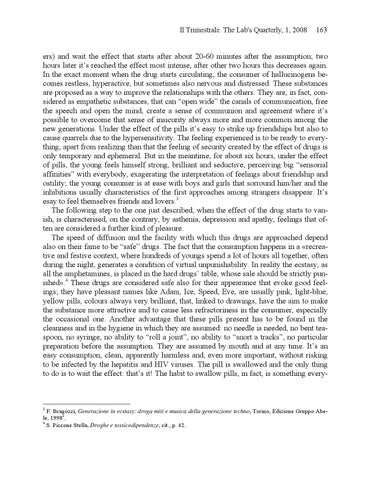 ers) and wait the effect that starts after about 20-60 minutes after the assumption; two hours later it’s reached the effect most intense, after other two hours this decreases again. In the exact moment when the drug starts circulating, the consumer of hallucinogens becomes restless, hyperactive, but sometimes also nervous and distressed. These substances are proposed as a way to improve the relationships with the others. They are, in fact, considered as empathetic substances, that can “open wide” the canals of communication, free the speech and open the mind, create a sense of communion and agreement where it’s possible to overcome that sense of insicurity always more and more common among the new generations. Under the effect of the pills it’s easy to strike up friendships but also to cause quarrels due to the hypersensitivity. The feeling experienced is to be ready to everything, apart from realizing than that the feeling of security created by the effect of drugs is only temporary and ephemeral. But in the meantime, for about six hours, under the effect of pills, the young feels himself strong, brilliant and seductive, perceiving big “sensorial affinities” with everybody, exagerating the interpretation of feelings about friendship and ostility; the young consumer is at ease with boys and girls that sorround him/her and the inhibitions usually characteristics of the first approaches among strangers disappear. It’s esay to feel themselves friends and lovers.3 The following step to the one just described, when the effect of the drug starts to vanish, is characterised, on the contrary, by asthenia, depression and apathy, feelings that often are considered a further kind of pleasure. The speed of diffusion and the facility with which this drugs are approached depend also on their fame to be “safe” drugs. The fact that the consumption happens in a «recreative and festive context, where hundreds of youngs spend a lot of hours all together, often during the night, generates a condition of virtual unpunishability. In reality the ecstasy, as all the amphetamines, is placed in the hard drugs’ table, whose sale should be strictly punished».4 These drugs are considered safe also for their appearance that evoke good feelings; they have pleasant names like Adam, Ice, Speed, Eve, are usually pink, light-blue, yellow pills, colours always very brilliant, that, linked to drawings, have the aim to make the substance more attractive and to cause less refractoriness in the consumer, especially the occasional one. Another advantage that these pills present has to be found in the cleanness and in the hygiene in which they are assumed: no needle is needed, no bent teaspoon, no syringe, no ability to “roll a joint”, no ability to “snort a tracks”, no particular preparation before the assumption. They are assumed by mouth and at any time. It’s an easy consumption, clean, apparently harmless and, even more important, without risking to be infected by the hepatitis and HIV viruses. The pill is swallowed and the only thing to do is to wait the effect: that’s it! The habit to swallow pills, in fact, is something every-