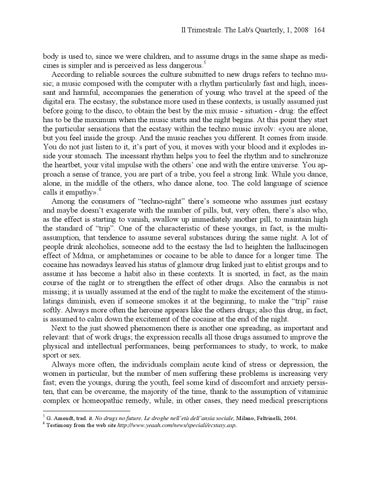 body is used to, since we were children, and to assume drugs in the same shape as medicines is simpler and is perceived as less dangerous.5 According to reliable sources the culture submitted to new drugs refers to techno music; a music composed with the computer with a rhythm particularly fast and high, incessant and harmful, accompanies the generation of young who travel at the speed of the digital era. The ecstasy, the substance more used in these contexts, is usually assumed just before going to the disco, to obtain the best by the mix music - situation - drug: the effect has to be the maximum when the music starts and the night begins. At this point they start the particular sensations that the ecstasy within the techno music involv: «you are alone, but you feel inside the group. And the music reaches you different. It comes from inside. You do not just listen to it, it’s part of you, it moves with your blood and it explodes inside your stomach. The incessant rhythm helps you to feel the rhythm and to sinchronize the heartbet, your vital impulse with the others’ one and with the entire universe. You approach a sense of trance, you are part of a tribe, you feel a strong link. While you dance, alone, in the middle of the others, who dance alone, too. The cold language of science calls it empathy».6 Among the consumers of “techno-night” there’s someone who assumes just ecstasy and maybe doesn’t exagerate with the number of pills, but, very often, there’s also who, as the effect is starting to vanish, swallow up immediately another pill, to maintain high the standard of “trip”. One of the characteristic of these youngs, in fact, is the multiassumption, that tendence to assume several substances during the same night. A lot of people drink alcoholics, someone add to the ecstasy the lsd to heighten the hallucinogen effect of Mdma, or amphetamines or cocaine to be able to dance for a longer time. The cocaine has nowadays leaved his status of glamour drug linked just to elitist groups and to assume it has become a habit also in these contexts. It is snorted, in fact, as the main course of the night or to strengthen the effect of other drugs. Also the cannabis is not missing; it is usually assumed at the end of the night to make the excitement of the stimulatings diminish, even if someone smokes it at the beginning, to make the “trip” raise softly. Always more often the heroine appears like the others drugs; also this drug, in fact, is assumed to calm down the excitement of the cocaine at the end of the night. Next to the just showed phenomenon there is another one spreading, as important and relevant: that of work drugs; the expression recalls all those drugs assumed to improve the physical and intellectual performances, being performances to study, to work, to make sport or sex. Always more often, the individuals complain acute kind of stress or depression, the women in particular, but the number of men suffering these problems is increasing very fast; even the youngs, during the youth, feel some kind of discomfort and anxiety persisten, that can be overcame, the majority of the time, thank to the assumption of vitaminic complex or homeopathic remedy, while, in other cases, they need medical prescriptions 5 6