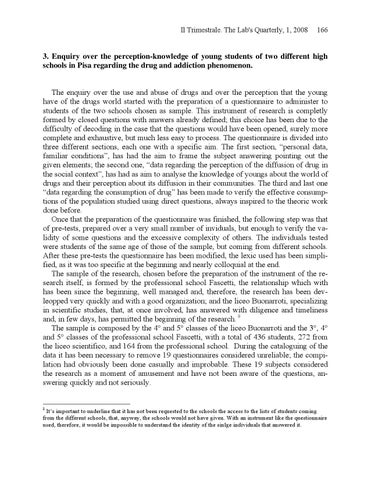 3. Enquiry over the perception-knowledge of young students of two different high schools in Pisa regarding the drug and addiction phenomenon. The enquiry over the use and abuse of drugs and over the perception that the young have of the drugs world started with the preparation of a questionnaire to administer to students of the two schools chosen as sample. This instrument of research is completly formed by closed questions with answers already defined; this choice has been due to the difficulty of decoding in the case that the questions would have been opened, surely more complete and exhaustive, but much less easy to process. The questionnaire is divided into three different sections, each one with a specific aim. The first section, “personal data, familiar conditions”, has had the aim to frame the subject answering pointing out the given elements; the second one, “data regarding the perception of the diffusion of drug in the social context”, has had as aim to analyse the knowledge of youngs about the world of drugs and their perception about its diffusion in their communities. The third and last one “data regarding the consumption of drug” has been made to verify the effective consumptions of the population studied using direct questions, always inspired to the theoric work done before. Once that the preparation of the questionnaire was finished, the following step was that of pre-tests, prepared over a very small number of inviduals, but enough to verify the validity of some questions and the excessive complexity of others. The individuals tested were students of the same age of those of the sample, but coming from different schools. After these pre-tests the questionnaire has been modified, the lexic used has been simplified, as it was too specific at the beginning and nearly colloquial at the end. The sample of the research, chosen before the preparation of the instrument of the research itself, is formed by the professional school Fascetti, the relationship which with has been since the beginning, well managed and, therefore, the research has been devleopped very quickly and with a good organization; and the liceo Buonarroti, specializing in scientific studies, that, at once involved, has answered with diligence and timeliness and, in few days, has permitted the beginning of the research. 8 The sample is composed by the 4° and 5° classes of the liceo Buonarroti and the 3°, 4° and 5° classes of the professional school Fascetti, with a total of 436 students, 272 from the liceo scientifico, and 164 from the professional school. During the cataloguing of the data it has been necessary to remove 19 questionnaires considered unreliable; the compilation had obviously been done casually and improbable. These 19 subjects considered the research as a moment of amusement and have not been aware of the questions, answering quickly and not seriously.

It’s important to underline that it has not been requested to the schools the access to the lists of students coming from the different schools, that, anyway, the schools would not have given. With an instrument like the questionnaire used, therefore, it would be impossible to understand the identity of the sinlge individuals that answered it.