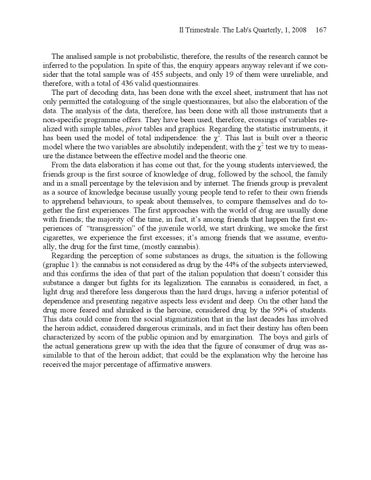 The analised sample is not probabilistic, therefore, the results of the research cannot be inferred to the population. In spite of this, the enquiry appears anyway relevant if we consider that the total sample was of 455 subjects, and only 19 of them were unreliable, and therefore, with a total of 436 valid questionnaires. The part of decoding data, has been done with the excel sheet, instrument that has not only permitted the cataloguing of the single questionnaires, but also the elaboration of the data. The analysis of the data, therefore, has been done with all those instruments that a non-specific programme offers. They have been used, therefore, crossings of variables realized with simple tables, pivot tables and graphics. Regarding the statistic instruments, it has been used the model of total indipendence: the χ2. This last is built over a theoric model where the two variables are absolutily independent; with the χ2 test we try to measure the distance between the effective model and the theoric one. From the data elaboration it has come out that, for the young students interviewed, the friends group is the first source of knowledge of drug, followed by the school, the family and in a small percentage by the television and by internet. The friends group is prevalent as a source of knowledge because usually young people tend to refer to their own friends to apprehend behaviours, to speak about themselves, to compare themselves and do together the first experiences. The first approaches with the world of drug are usually done with friends; the majority of the time, in fact, it’s among friends that happen the first experiences of “transgression” of the juvenile world, we start drinking, we smoke the first cigarettes, we experience the first excesses; it’s among friends that we assume, eventually, the drug for the first time, (mostly cannabis). Regarding the perception of some substances as drugs, the situation is the following (graphic 1): the cannabis is not considered as drug by the 44% of the subjects interviewed, and this confirms the idea of that part of the italian population that doesn’t consider this substance a danger but fights for its legalization. The cannabis is considered, in fact, a light drug and therefore less dangerous than the hard drugs, having a inferior potential of dependence and presenting negative aspects less evident and deep. On the other hand the drug more feared and shrinked is the heroine, considered drug by the 99% of students. This data could come from the social stigmatization that in the last decades has involved the heroin addict, considered dangerous criminals, and in fact their destiny has often been characterized by scorn of the public opinion and by emargination. The boys and girls of the actual generations grew up with the idea that the figure of consumer of drug was assimilable to that of the heroin addict; that could be the explanation why the heroine has received the major percentage of affirmative answers.