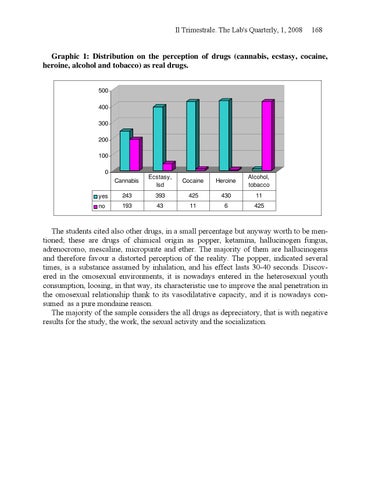 The students cited also other drugs, in a small percentage but anyway worth to be mentioned; these are drugs of chimical origin as popper, ketamina, hallucinogen fungus, adrenocromo, mescaline, micropunte and ether. The majority of them are hallucinogens and therefore favour a distorted perception of the reality. The popper, indicated several times, is a substance assumed by inhalation, and his effect lasts 30-40 seconds. Discovered in the omosexual environments, it is nowadays entered in the heterosexual youth consumption, loosing, in that way, its characteristic use to improve the anal penetration in the omosexual relationship thank to its vasodilatative capacity, and it is nowadays consumed as a pure mondaine reason. The majority of the sample considers the all drugs as depreciatory, that is with negative results for the study, the work, the sexual activity and the socialization.