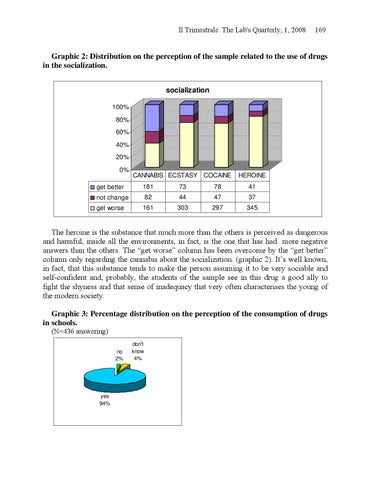 The heroine is the substance that much more than the others is perceived as dangerous and harmful, inside all the environments, in fact, is the one that has had more negative answers than the others. The “get worse” column has been overcome by the “get better” column only regarding the cannabis about the socialization. (graphic 2). It’s well known, in fact, that this substance tends to make the person assuming it to be very sociable and self-confident and, probably, the students of the sample see in this drug a good ally to fight the shyness and that sense of inadequacy that very often characterises the young of the modern society. Graphic 3: Percentage distribution on the perception of the consumption of drugs in schools. (N=436 answering) no 2%