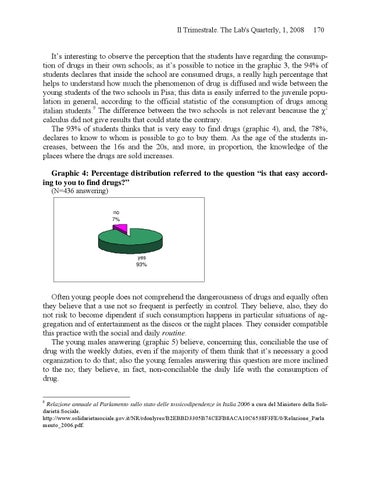 It’s interesting to observe the perception that the students have regarding the consumption of drugs in their own schools; as it’s possible to notice in the graphic 3, the 94% of students declares that inside the school are consumed drugs, a really high percentage that helps to understand how much the phenomenon of drug is diffused and wide between the young students of the two schools in Pisa; this data is easily inferred to the juvenile population in general, according to the official statistic of the consumption of drugs among italian students.9 The difference between the two schools is not relevant beacause the χ2 calculus did not give results that could state the contrary. The 93% of students thinks that is very easy to find drugs (graphic 4), and, the 78%, declares to know to whom is possible to go to buy them. As the age of the students increases, between the 16s and the 20s, and more, in proportion, the knowledge of the places where the drugs are sold increases. Graphic 4: Percentage distribution referred to the question “is that easy according to you to find drugs?” (N=436 answering) no 7%

Often young people does not comprehend the dangerousness of drugs and equally often they believe that a use not so frequent is perfectly in control. They believe, also, they do not risk to become dipendent if such consumption happens in particular situations of aggregation and of entertainment as the discos or the night places. They consider compatible this practice with the social and daily routine. The young males answering (graphic 5) believe, concerning this, conciliable the use of drug with the weekly duties, even if the majority of them think that it’s necessary a good organization to do that; also the young females answering this question are more inclined to the no; they believe, in fact, non-conciliable the daily life with the consumption of drug. 9