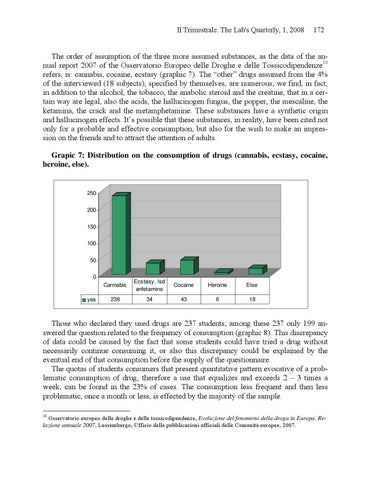 The order of assumption of the three more assumed substances, as the data of the annual report 2007 of the Osservatorio Europeo delle Droghe e delle Tossicodipendenze10 refers, is: cannabis, cocaine, ecstasy (graphic 7). The “other” drugs assumed from the 4% of the interviewed (18 subjects), specified by themselves, are numerous; we find, in fact, in addition to the alcohol, the tobacco, the anabolic steroid and the creatine, that in a certain way are legal, also the acids, the hallucinogen fungus, the popper, the mescaline, the ketamina, the crack and the metamphetamine. These substances have a synthetic origin and hallucinogen effects. It’s possible that these substances, in reality, have been cited not only for a probable and effective consumption, but also for the wish to make an impression on the friends and to attract the attention of adults. Grapic 7: Distribution on the consumption of drugs (cannabis, ecstasy, cocaine, heroine, else).

Those who declared they used drugs are 237 students; among these 237 only 199 answered the question related to the frequency of consumption (graphic 8). This discrepancy of data could be caused by the fact that some students could have tried a drug without necessarily continue consuming it, or also this discrepancy could be explained by the eventual end of that consumption before the supply of the questionnaire. The quotas of students consumers that present quantitative pattern evocative of a problematic consumption of drug, therefore a use that equalizes and exceeds 2 – 3 times a week, can be found in the 23% of cases. The consumption less frequent and then less problematic, once a month or less, is effected by the majority of the sample. 10