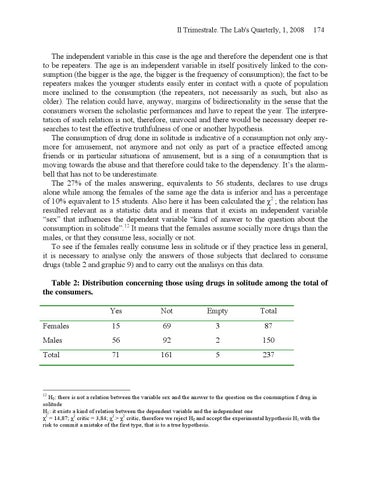 The independent variable in this case is the age and therefore the dependent one is that to be repeaters. The age is an independent variable in itself positively linked to the consumption (the bigger is the age, the bigger is the frequency of consumption); the fact to be repeaters makes the younger students easily enter in contact with a quote of population more inclined to the consumption (the repeaters, not necessarily as such, but also as older). The relation could have, anyway, margins of bidirectionality in the sense that the consumers worsen the scholastic performances and have to repeat the year. The interpretation of such relation is not, therefore, univocal and there would be necessary deeper researches to test the effective truthfulness of one or another hypothesis. The consumption of drug done in solitude is indicative of a consumption not only anymore for amusement, not anymore and not only as part of a practice effected among friends or in particular situations of amusement, but is a sing of a consumption that is moving towards the abuse and that therefore could take to the dependency. It’s the alarmbell that has not to be underestimate. The 27% of the males answering, equivalents to 56 students, declares to use drugs alone while among the females of the same age the data is inferior and has a percentage of 10% equivalent to 15 students. Also here it has been calculated the χ2 ; the relation has resulted relevant as a statistic data and it means that it exists an independent variable “sex” that influences the dependent variable “kind of answer to the question about the consumption in solitude”.12 It means that the females assume socially more drugs than the males, or that they consume less, socially or not. To see if the females really consume less in solitude or if they practice less in general, it is necessary to analyse only the answers of those subjects that declared to consume drugs (table 2 and graphic 9) and to carry out the analisys on this data. Table 2: Distribution concerning those using drugs in solitude among the total of the consumers. Yes

H0: there is not a relation between the variable sex and the answer to the question on the consumption f drug in solitude H1: it exists a kind of relation between the dependent variable and the independent one χ2 = 14,87; χ2 critic = 3,84; χ2 &gt; χ2 critic, therefore we reject H0 and accept the experimental hypothesis H1 with the risk to commit a mistake of the first type, that is to a true hypothesis.