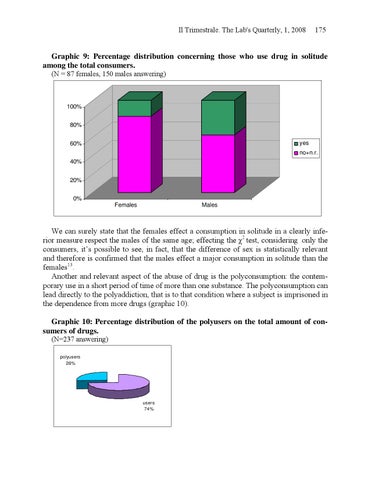 Graphic 9: Percentage distribution concerning those who use drug in solitude among the total consumers. (N = 87 females, 150 males answering)

We can surely state that the females effect a consumption in solitude in a clearly inferior measure respect the males of the same age; effecting the Ď&amp;#x2021;2 test, considering only the consumers, itâ&amp;#x20AC;&amp;#x2122;s possible to see, in fact, that the difference of sex is statistically relevant and therefore is confirmed that the males effect a major consumption in solitude than the females13. Another and relevant aspect of the abuse of drug is the polyconsumption: the contemporary use in a short period of time of more than one substance. The polyconsumption can lead directly to the polyaddiction, that is to that condition where a subject is imprisoned in the dependence from more drugs (graphic 10). Graphic 10: Percentage distribution of the polyusers on the total amount of consumers of drugs. (N=237 answering) polyusers 26%