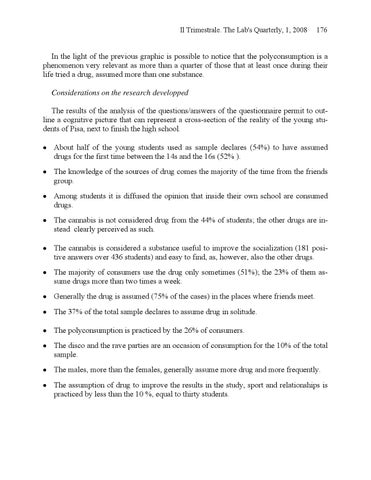 In the light of the previous graphic is possible to notice that the polyconsumption is a phenomenon very relevant as more than a quarter of those that at least once during their life tried a drug, assumed more than one substance. Considerations on the research developped The results of the analysis of the questions/answers of the questionnaire permit to outline a cognitive picture that can represent a cross-section of the reality of the young students of Pisa, next to finish the high school. • About half of the young students used as sample declares (54%) to have assumed drugs for the first time between the 14s and the 16s (52% ). • The knowledge of the sources of drug comes the majority of the time from the friends group. • Among students it is diffused the opinion that inside their own school are consumed drugs. • The cannabis is not considered drug from the 44% of students; the other drugs are instead clearly perceived as such. • The cannabis is considered a substance useful to improve the socialization (181 positive answers over 436 students) and easy to find, as, however, also the other drugs. • The majority of consumers use the drug only sometimes (51%); the 23% of them assume drugs more than two times a week. • Generally the drug is assumed (75% of the cases) in the places where friends meet. • The 37% of the total sample declares to assume drug in solitude. • The polyconsumption is practiced by the 26% of consumers. • The disco and the rave parties are an occasion of consumption for the 10% of the total sample. • The males, more than the females, generally assume more drug and more frequently. • The assumption of drug to improve the results in the study, sport and relationships is practiced by less than the 10 %, equal to thirty students.