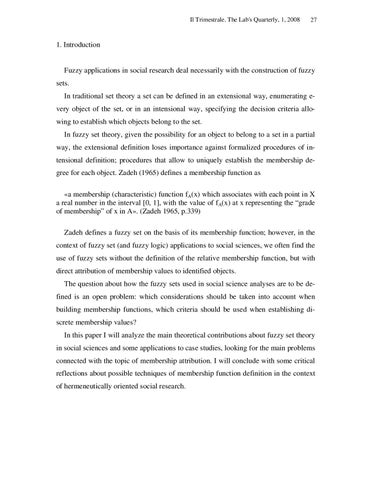 Fuzzy applications in social research deal necessarily with the construction of fuzzy sets. In traditional set theory a set can be defined in an extensional way, enumerating every object of the set, or in an intensional way, specifying the decision criteria allowing to establish which objects belong to the set. In fuzzy set theory, given the possibility for an object to belong to a set in a partial way, the extensional definition loses importance against formalized procedures of intensional definition; procedures that allow to uniquely establish the membership degree for each object. Zadeh (1965) defines a membership function as «a membership (characteristic) function fA(x) which associates with each point in X a real number in the interval [0, 1], with the value of fA(x) at x representing the “grade of membership” of x in A». (Zadeh 1965, p.339) Zadeh defines a fuzzy set on the basis of its membership function; however, in the context of fuzzy set (and fuzzy logic) applications to social sciences, we often find the use of fuzzy sets without the definition of the relative membership function, but with direct attribution of membership values to identified objects. The question about how the fuzzy sets used in social science analyses are to be defined is an open problem: which considerations should be taken into account when building membership functions, which criteria should be used when establishing discrete membership values? In this paper I will analyze the main theoretical contributions about fuzzy set theory in social sciences and some applications to case studies, looking for the main problems connected with the topic of membership attribution. I will conclude with some critical reflections about possible techniques of membership function definition in the context of hermeneutically oriented social research.