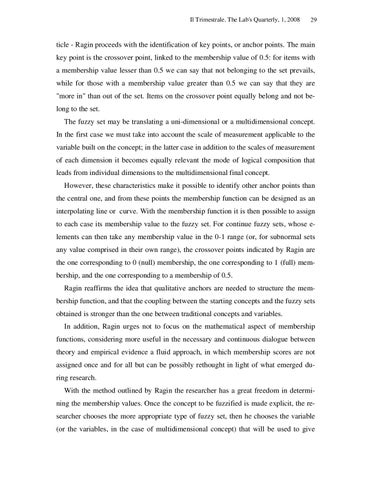 ticle - Ragin proceeds with the identification of key points, or anchor points. The main key point is the crossover point, linked to the membership value of 0.5: for items with a membership value lesser than 0.5 we can say that not belonging to the set prevails, while for those with a membership value greater than 0.5 we can say that they are &quot;more in&quot; than out of the set. Items on the crossover point equally belong and not belong to the set. The fuzzy set may be translating a uni-dimensional or a multidimensional concept. In the first case we must take into account the scale of measurement applicable to the variable built on the concept; in the latter case in addition to the scales of measurement of each dimension it becomes equally relevant the mode of logical composition that leads from individual dimensions to the multidimensional final concept. However, these characteristics make it possible to identify other anchor points than the central one, and from these points the membership function can be designed as an interpolating line or curve. With the membership function it is then possible to assign to each case its membership value to the fuzzy set. For continue fuzzy sets, whose elements can then take any membership value in the 0-1 range (or, for subnormal sets any value comprised in their own range), the crossover points indicated by Ragin are the one corresponding to 0 (null) membership, the one corresponding to 1 (full) membership, and the one corresponding to a membership of 0.5. Ragin reaffirms the idea that qualitative anchors are needed to structure the membership function, and that the coupling between the starting concepts and the fuzzy sets obtained is stronger than the one between traditional concepts and variables. In addition, Ragin urges not to focus on the mathematical aspect of membership functions, considering more useful in the necessary and continuous dialogue between theory and empirical evidence a fluid approach, in which membership scores are not assigned once and for all but can be possibly rethought in light of what emerged during research. With the method outlined by Ragin the researcher has a great freedom in determining the membership values. Once the concept to be fuzzified is made explicit, the researcher chooses the more appropriate type of fuzzy set, then he chooses the variable (or the variables, in the case of multidimensional concept) that will be used to give