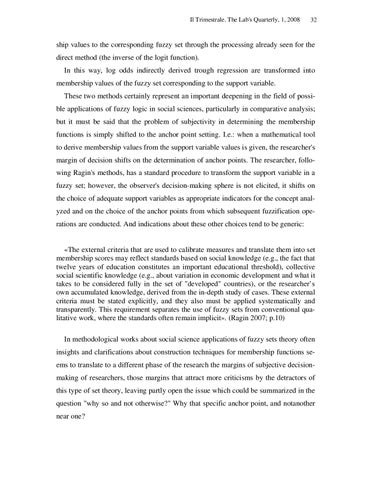 ship values to the corresponding fuzzy set through the processing already seen for the direct method (the inverse of the logit function). In this way, log odds indirectly derived trough regression are transformed into membership values of the fuzzy set corresponding to the support variable. These two methods certainly represent an important deepening in the field of possible applications of fuzzy logic in social sciences, particularly in comparative analysis; but it must be said that the problem of subjectivity in determining the membership functions is simply shifted to the anchor point setting. I.e.: when a mathematical tool to derive membership values from the support variable values is given, the researcher&#39;s margin of decision shifts on the determination of anchor points. The researcher, following Ragin&#39;s methods, has a standard procedure to transform the support variable in a fuzzy set; however, the observer&#39;s decision-making sphere is not elicited, it shifts on the choice of adequate support variables as appropriate indicators for the concept analyzed and on the choice of the anchor points from which subsequent fuzzification operations are conducted. And indications about these other choices tend to be generic:

ÂŤThe external criteria that are used to calibrate measures and translate them into set membership scores may reflect standards based on social knowledge (e.g., the fact that twelve years of education constitutes an important educational threshold), collective social scientific knowledge (e.g., about variation in economic development and what it takes to be considered fully in the set of &quot;developed&quot; countries), or the researcherâ&amp;#x20AC;&amp;#x2122;s own accumulated knowledge, derived from the in-depth study of cases. These external criteria must be stated explicitly, and they also must be applied systematically and transparently. This requirement separates the use of fuzzy sets from conventional qualitative work, where the standards often remain implicitÂť. (Ragin 2007; p.10) In methodological works about social science applications of fuzzy sets theory often insights and clarifications about construction techniques for membership functions seems to translate to a different phase of the research the margins of subjective decisionmaking of researchers, those margins that attract more criticisms by the detractors of this type of set theory, leaving partly open the issue which could be summarized in the question &quot;why so and not otherwise?&quot; Why that specific anchor point, and notanother near one?