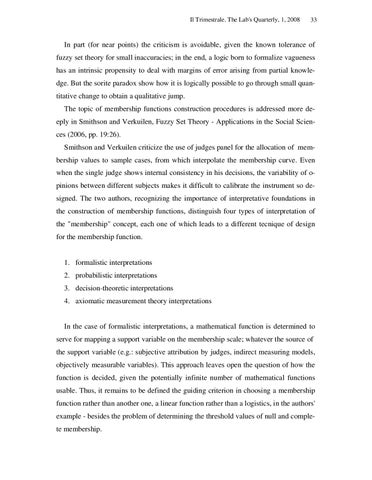 In part (for near points) the criticism is avoidable, given the known tolerance of fuzzy set theory for small inaccuracies; in the end, a logic born to formalize vagueness has an intrinsic propensity to deal with margins of error arising from partial knowledge. But the sorite paradox show how it is logically possible to go through small quantitative change to obtain a qualitative jump. The topic of membership functions construction procedures is addressed more deeply in Smithson and Verkuilen, Fuzzy Set Theory - Applications in the Social Sciences (2006, pp. 19:26). Smithson and Verkuilen criticize the use of judges panel for the allocation of membership values to sample cases, from which interpolate the membership curve. Even when the single judge shows internal consistency in his decisions, the variability of opinions between different subjects makes it difficult to calibrate the instrument so designed. The two authors, recognizing the importance of interpretative foundations in the construction of membership functions, distinguish four types of interpretation of the &quot;membership&quot; concept, each one of which leads to a different tecnique of design for the membership function.

In the case of formalistic interpretations, a mathematical function is determined to serve for mapping a support variable on the membership scale; whatever the source of the support variable (e.g.: subjective attribution by judges, indirect measuring models, objectively measurable variables). This approach leaves open the question of how the function is decided, given the potentially infinite number of mathematical functions usable. Thus, it remains to be defined the guiding criterion in choosing a membership function rather than another one, a linear function rather than a logistics, in the authors&#39; example - besides the problem of determining the threshold values of null and complete membership.