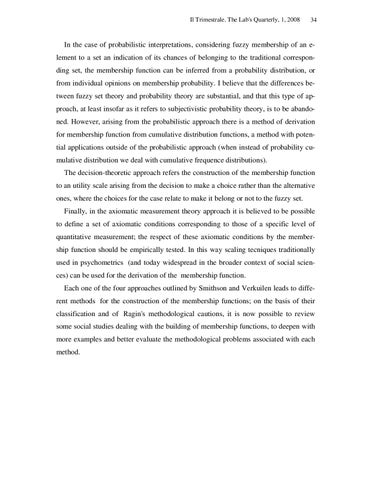 In the case of probabilistic interpretations, considering fuzzy membership of an element to a set an indication of its chances of belonging to the traditional corresponding set, the membership function can be inferred from a probability distribution, or from individual opinions on membership probability. I believe that the differences between fuzzy set theory and probability theory are substantial, and that this type of approach, at least insofar as it refers to subjectivistic probability theory, is to be abandoned. However, arising from the probabilistic approach there is a method of derivation for membership function from cumulative distribution functions, a method with potential applications outside of the probabilistic approach (when instead of probability cumulative distribution we deal with cumulative frequence distributions). The decision-theoretic approach refers the construction of the membership function to an utility scale arising from the decision to make a choice rather than the alternative ones, where the choices for the case relate to make it belong or not to the fuzzy set. Finally, in the axiomatic measurement theory approach it is believed to be possible to define a set of axiomatic conditions corresponding to those of a specific level of quantitative measurement; the respect of these axiomatic conditions by the membership function should be empirically tested. In this way scaling tecniques traditionally used in psychometrics (and today widespread in the broader context of social sciences) can be used for the derivation of the membership function. Each one of the four approaches outlined by Smithson and Verkuilen leads to different methods for the construction of the membership functions; on the basis of their classification and of Ragin&#39;s methodological cautions, it is now possible to review some social studies dealing with the building of membership functions, to deepen with more examples and better evaluate the methodological problems associated with each method.