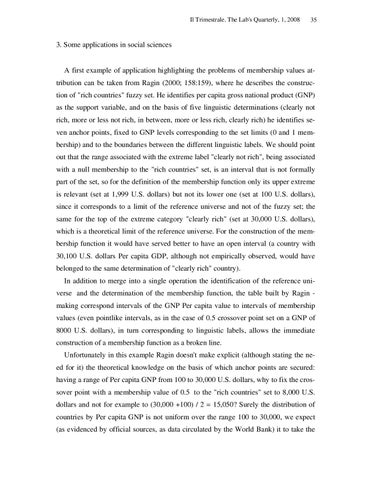 3. Some applications in social sciences

A first example of application highlighting the problems of membership values attribution can be taken from Ragin (2000; 158:159), where he describes the construction of &quot;rich countries&quot; fuzzy set. He identifies per capita gross national product (GNP) as the support variable, and on the basis of five linguistic determinations (clearly not rich, more or less not rich, in between, more or less rich, clearly rich) he identifies seven anchor points, fixed to GNP levels corresponding to the set limits (0 and 1 membership) and to the boundaries between the different linguistic labels. We should point out that the range associated with the extreme label &quot;clearly not rich&quot;, being associated with a null membership to the &quot;rich countries&quot; set, is an interval that is not formally part of the set, so for the definition of the membership function only its upper extreme is relevant (set at 1,999 U.S. dollars) but not its lower one (set at 100 U.S. dollars), since it corresponds to a limit of the reference universe and not of the fuzzy set; the same for the top of the extreme category &quot;clearly rich&quot; (set at 30,000 U.S. dollars), which is a theoretical limit of the reference universe. For the construction of the membership function it would have served better to have an open interval (a country with 30,100 U.S. dollars Per capita GDP, although not empirically observed, would have belonged to the same determination of &quot;clearly rich&quot; country). In addition to merge into a single operation the identification of the reference universe and the determination of the membership function, the table built by Ragin making correspond intervals of the GNP Per capita value to intervals of membership values (even pointlike intervals, as in the case of 0.5 crossover point set on a GNP of 8000 U.S. dollars), in turn corresponding to linguistic labels, allows the immediate construction of a membership function as a broken line. Unfortunately in this example Ragin doesn&#39;t make explicit (although stating the need for it) the theoretical knowledge on the basis of which anchor points are secured: having a range of Per capita GNP from 100 to 30,000 U.S. dollars, why to fix the crossover point with a membership value of 0.5 to the &quot;rich countries&quot; set to 8,000 U.S. dollars and not for example to (30,000 +100) / 2 = 15,050? Surely the distribution of countries by Per capita GNP is not uniform over the range 100 to 30,000, we expect (as evidenced by official sources, as data circulated by the World Bank) it to take the