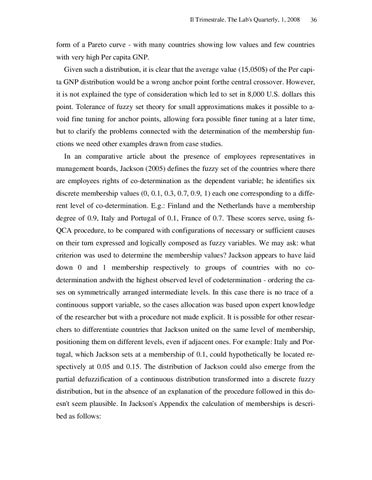 form of a Pareto curve - with many countries showing low values and few countries with very high Per capita GNP. Given such a distribution, it is clear that the average value (15,050$) of the Per capita GNP distribution would be a wrong anchor point forthe central crossover. However, it is not explained the type of consideration which led to set in 8,000 U.S. dollars this point. Tolerance of fuzzy set theory for small approximations makes it possible to avoid fine tuning for anchor points, allowing fora possible finer tuning at a later time, but to clarify the problems connected with the determination of the membership functions we need other examples drawn from case studies. In an comparative article about the presence of employees representatives in management boards, Jackson (2005) defines the fuzzy set of the countries where there are employees rights of co-determination as the dependent variable; he identifies six discrete membership values (0, 0.1, 0.3, 0.7, 0.9, 1) each one corresponding to a different level of co-determination. E.g.: Finland and the Netherlands have a membership degree of 0.9, Italy and Portugal of 0.1, France of 0.7. These scores serve, using fsQCA procedure, to be compared with configurations of necessary or sufficient causes on their turn expressed and logically composed as fuzzy variables. We may ask: what criterion was used to determine the membership values? Jackson appears to have laid down 0 and 1 membership respectively to groups of countries with no codetermination andwith the highest observed level of codetermination - ordering the cases on symmetrically arranged intermediate levels. In this case there is no trace of a continuous support variable, so the cases allocation was based upon expert knowledge of the researcher but with a procedure not made explicit. It is possible for other researchers to differentiate countries that Jackson united on the same level of membership, positioning them on different levels, even if adjacent ones. For example: Italy and Portugal, which Jackson sets at a membership of 0.1, could hypothetically be located respectively at 0.05 and 0.15. The distribution of Jackson could also emerge from the partial defuzzification of a continuous distribution transformed into a discrete fuzzy distribution, but in the absence of an explanation of the procedure followed in this doesn&#39;t seem plausible. In Jackson&#39;s Appendix the calculation of memberships is described as follows: