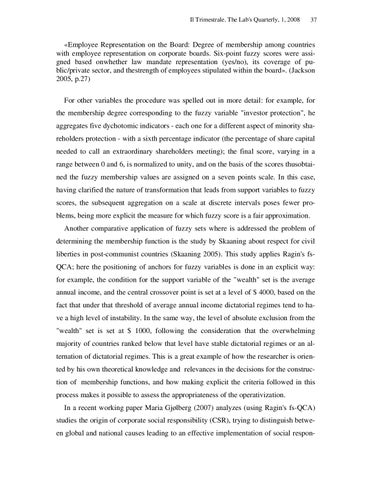 ÂŤEmployee Representation on the Board: Degree of membership among countries with employee representation on corporate boards. Six-point fuzzy scores were assigned based onwhether law mandate representation (yes/no), its coverage of public/private sector, and thestrength of employees stipulated within the boardÂť. (Jackson 2005, p.27) For other variables the procedure was spelled out in more detail: for example, for the membership degree corresponding to the fuzzy variable &quot;investor protection&quot;, he aggregates five dychotomic indicators - each one for a different aspect of minority shareholders protection - with a sixth percentage indicator (the percentage of share capital needed to call an extraordinary shareholders meeting); the final score, varying in a range between 0 and 6, is normalized to unity, and on the basis of the scores thusobtained the fuzzy membership values are assigned on a seven points scale. In this case, having clarified the nature of transformation that leads from support variables to fuzzy scores, the subsequent aggregation on a scale at discrete intervals poses fewer problems, being more explicit the measure for which fuzzy score is a fair approximation. Another comparative application of fuzzy sets where is addressed the problem of determining the membership function is the study by Skaaning about respect for civil liberties in post-communist countries (Skaaning 2005). This study applies Ragin&#39;s fsQCA; here the positioning of anchors for fuzzy variables is done in an explicit way: for example, the condition for the support variable of the &quot;wealth&quot; set is the average annual income, and the central crossover point is set at a level of $ 4000, based on the fact that under that threshold of average annual income dictatorial regimes tend to have a high level of instability. In the same way, the level of absolute exclusion from the &quot;wealth&quot; set is set at $ 1000, following the consideration that the overwhelming majority of countries ranked below that level have stable dictatorial regimes or an alternation of dictatorial regimes. This is a great example of how the researcher is oriented by his own theoretical knowledge and relevances in the decisions for the construction of membership functions, and how making explicit the criteria followed in this process makes it possible to assess the appropriateness of the operativization. In a recent working paper Maria GjĂ¸lberg (2007) analyzes (using Ragin&#39;s fs-QCA) studies the origin of corporate social responsibility (CSR), trying to distinguish between global and national causes leading to an effective implementation of social respon-