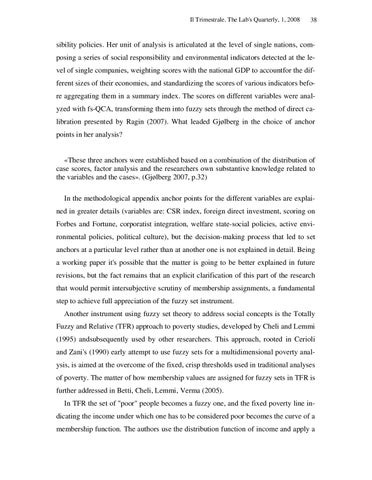 sibility policies. Her unit of analysis is articulated at the level of single nations, composing a series of social responsibility and environmental indicators detected at the level of single companies, weighting scores with the national GDP to accountfor the different sizes of their economies, and standardizing the scores of various indicators before aggregating them in a summary index. The scores on different variables were analyzed with fs-QCA, transforming them into fuzzy sets through the method of direct calibration presented by Ragin (2007). What leaded Gjølberg in the choice of anchor points in her analysis?

«These three anchors were established based on a combination of the distribution of case scores, factor analysis and the researchers own substantive knowledge related to the variables and the cases». (Gjølberg 2007, p.32) In the methodological appendix anchor points for the different variables are explained in greater details (variables are: CSR index, foreign direct investment, scoring on Forbes and Fortune, corporatist integration, welfare state-social policies, active environmental policies, political culture), but the decision-making process that led to set anchors at a particular level rather than at another one is not explained in detail. Being a working paper it&#39;s possible that the matter is going to be better explained in future revisions, but the fact remains that an explicit clarification of this part of the research that would permit intersubjective scrutiny of membership assignments, a fundamental step to achieve full appreciation of the fuzzy set instrument. Another instrument using fuzzy set theory to address social concepts is the Totally Fuzzy and Relative (TFR) approach to poverty studies, developed by Cheli and Lemmi (1995) andsubsequently used by other researchers. This approach, rooted in Cerioli and Zani&#39;s (1990) early attempt to use fuzzy sets for a multidimensional poverty analysis, is aimed at the overcome of the fixed, crisp thresholds used in traditional analyses of poverty. The matter of how membership values are assigned for fuzzy sets in TFR is further addressed in Betti, Cheli, Lemmi, Verma (2005). In TFR the set of &quot;poor&quot; people becomes a fuzzy one, and the fixed poverty line indicating the income under which one has to be considered poor becomes the curve of a membership function. The authors use the distribution function of income and apply a