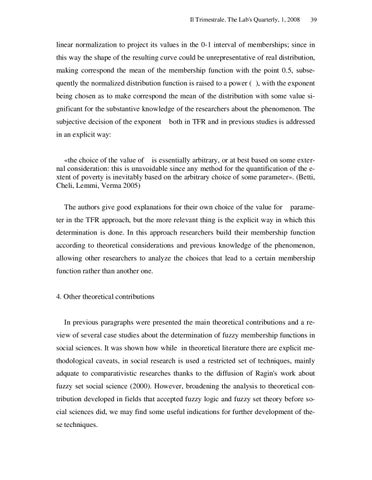 linear normalization to project its values in the 0-1 interval of memberships; since in this way the shape of the resulting curve could be unrepresentative of real distribution, making correspond the mean of the membership function with the point 0.5, subsequently the normalized distribution function is raised to a power (α), with the exponent being chosen as to make correspond the mean of the distribution with some value significant for the substantive knowledge of the researchers about the phenomenon. The subjective decision of the exponent α both in TFR and in previous studies is addressed in an explicit way:

«the choice of the value of α is essentially arbitrary, or at best based on some external consideration: this is unavoidable since any method for the quantification of the extent of poverty is inevitably based on the arbitrary choice of some parameter». (Betti, Cheli, Lemmi, Verma 2005) The authors give good explanations for their own choice of the value for α parameter in the TFR approach, but the more relevant thing is the explicit way in which this determination is done. In this approach researchers build their membership function according to theoretical considerations and previous knowledge of the phenomenon, allowing other researchers to analyze the choices that lead to a certain membership function rather than another one.

In previous paragraphs were presented the main theoretical contributions and a review of several case studies about the determination of fuzzy membership functions in social sciences. It was shown how while in theoretical literature there are explicit methodological caveats, in social research is used a restricted set of techniques, mainly adquate to comparativistic researches thanks to the diffusion of Ragin&#39;s work about fuzzy set social science (2000). However, broadening the analysis to theoretical contribution developed in fields that accepted fuzzy logic and fuzzy set theory before social sciences did, we may find some useful indications for further development of these techniques.