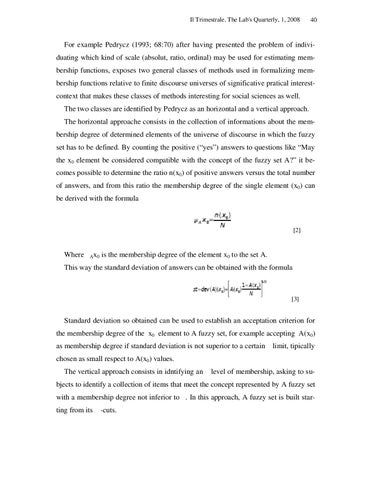 For example Pedrycz (1993; 68:70) after having presented the problem of individuating which kind of scale (absolut, ratio, ordinal) may be used for estimating membership functions, exposes two general classes of methods used in formalizing membership functions relative to finite discourse universes of significative pratical interestcontext that makes these classes of methods interesting for social sciences as well. The two classes are identified by Pedrycz as an horizontal and a vertical approach. The horizontal approache consists in the collection of informations about the membership degree of determined elements of the universe of discourse in which the fuzzy set has to be defined. By counting the positive (“yes”) answers to questions like “May the x0 element be considered compatible with the concept of the fuzzy set A?” it becomes possible to determine the ratio n(x0) of positive answers versus the total number of answers, and from this ratio the membership degree of the single element (x0) can be derived with the formula

Where μAx0 is the membership degree of the element x0 to the set A. This way the standard deviation of answers can be obtained with the formula