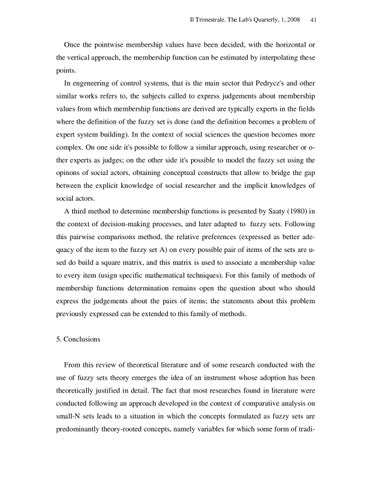 Once the pointwise membership values have been decided, with the horizontal or the vertical approach, the membership function can be estimated by interpolating these points. In engeneering of control systems, that is the main sector that Pedrycz&#39;s and other similar works refers to, the subjects called to express judgements about membership values from which membership functions are derived are typically experts in the fields where the definition of the fuzzy set is done (and the definition becomes a problem of expert system building). In the context of social sciences the question becomes more complex. On one side it&#39;s possible to follow a similar approach, using researcher or other experts as judges; on the other side it&#39;s possible to model the fuzzy set using the opinons of social actors, obtaining conceptual constructs that allow to bridge the gap between the explicit knowledge of social researcher and the implicit knowledges of social actors. A third method to determine membership functions is presented by Saaty (1980) in the context of decision-making processes, and later adapted to fuzzy sets. Following this pairwise comparisons method, the relative preferences (expressed as better adequacy of the item to the fuzzy set A) on every possible pair of items of the sets are used do build a square matrix, and this matrix is used to associate a membership value to every item (usign specific mathematical techniques). For this family of methods of membership functions determination remains open the question about who should express the judgements about the pairs of items; the statements about this problem previously expressed can be extended to this family of methods.

From this review of theoretical literature and of some research conducted with the use of fuzzy sets theory emerges the idea of an instrument whose adoption has been theoretically justified in detail. The fact that most researches found in literature were conducted following an approach developed in the context of comparative analysis on small-N sets leads to a situation in which the concepts formulated as fuzzy sets are predominantly theory-rooted concepts, namely variables for which some form of tradi-