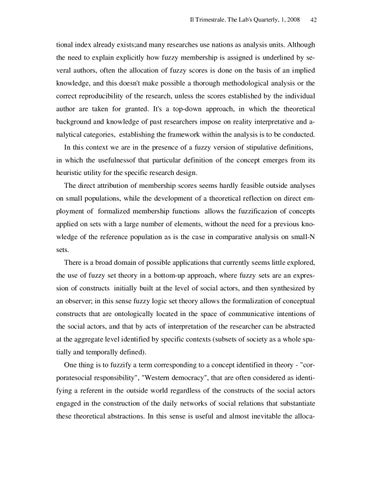 tional index already exists;and many researches use nations as analysis units. Although the need to explain explicitly how fuzzy membership is assigned is underlined by several authors, often the allocation of fuzzy scores is done on the basis of an implied knowledge, and this doesn&#39;t make possible a thorough methodological analysis or the correct reproducibility of the research, unless the scores established by the individual author are taken for granted. It&#39;s a top-down approach, in which the theoretical background and knowledge of past researchers impose on reality interpretative and analytical categories, establishing the framework within the analysis is to be conducted. In this context we are in the presence of a fuzzy version of stipulative definitions, in which the usefulnessof that particular definition of the concept emerges from its heuristic utility for the specific research design. The direct attribution of membership scores seems hardly feasible outside analyses on small populations, while the development of a theoretical reflection on direct employment of formalized membership functions allows the fuzzificazion of concepts applied on sets with a large number of elements, without the need for a previous knowledge of the reference population as is the case in comparative analysis on small-N sets. There is a broad domain of possible applications that currently seems little explored, the use of fuzzy set theory in a bottom-up approach, where fuzzy sets are an expression of constructs initially built at the level of social actors, and then synthesized by an observer; in this sense fuzzy logic set theory allows the formalization of conceptual constructs that are ontologically located in the space of communicative intentions of the social actors, and that by acts of interpretation of the researcher can be abstracted at the aggregate level identified by specific contexts (subsets of society as a whole spatially and temporally defined). One thing is to fuzzify a term corresponding to a concept identified in theory - &quot;corporatesocial responsibility&quot;, &quot;Western democracy&quot;, that are often considered as identifying a referent in the outside world regardless of the constructs of the social actors engaged in the construction of the daily networks of social relations that substantiate these theoretical abstractions. In this sense is useful and almost inevitable the alloca-