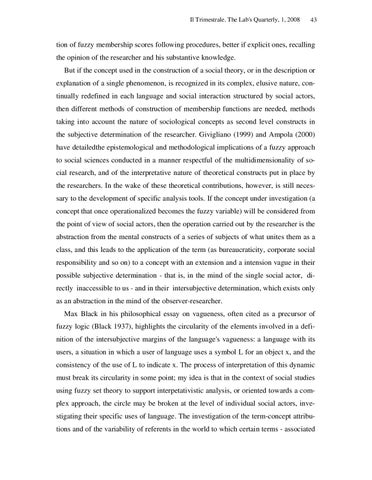 tion of fuzzy membership scores following procedures, better if explicit ones, recalling the opinion of the researcher and his substantive knowledge. But if the concept used in the construction of a social theory, or in the description or explanation of a single phenomenon, is recognized in its complex, elusive nature, continually redefined in each language and social interaction structured by social actors, then different methods of construction of membership functions are needed, methods taking into account the nature of sociological concepts as second level constructs in the subjective determination of the researcher. Givigliano (1999) and Ampola (2000) have detailedthe epistemological and methodological implications of a fuzzy approach to social sciences conducted in a manner respectful of the multidimensionality of social research, and of the interpretative nature of theoretical constructs put in place by the researchers. In the wake of these theoretical contributions, however, is still necessary to the development of specific analysis tools. If the concept under investigation (a concept that once operationalized becomes the fuzzy variable) will be considered from the point of view of social actors, then the operation carried out by the researcher is the abstraction from the mental constructs of a series of subjects of what unites them as a class, and this leads to the application of the term (as bureaucraticity, corporate social responsibility and so on) to a concept with an extension and a intension vague in their possible subjective determination - that is, in the mind of the single social actor, directly inaccessible to us - and in their intersubjective determination, which exists only as an abstraction in the mind of the observer-researcher. Max Black in his philosophical essay on vagueness, often cited as a precursor of fuzzy logic (Black 1937), highlights the circularity of the elements involved in a definition of the intersubjective margins of the language&#39;s vagueness: a language with its users, a situation in which a user of language uses a symbol L for an object x, and the consistency of the use of L to indicate x. The process of interpretation of this dynamic must break its circularity in some point; my idea is that in the context of social studies using fuzzy set theory to support interpetativistic analysis, or oriented towards a complex approach, the circle may be broken at the level of individual social actors, investigating their specific uses of language. The investigation of the term-concept attributions and of the variability of referents in the world to which certain terms - associated