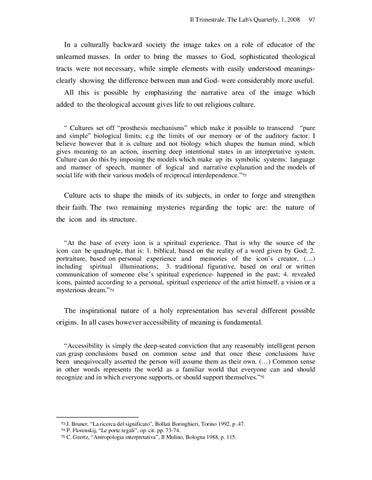 In a culturally backward society the image takes on a role of educator of the unlearned masses. In order to bring the masses to God, sophisticated theological tracts were not necessary, while simple elements with easily understood meaningsclearly showing the difference between man and God- were considerably more useful. All this is possible by emphasizing the narrative area of the image which added to the theological account gives life to out religious culture. “ Cultures set off “prosthesis mechanisms” which make it possible to transcend “pure and simple” biological limits; e.g the limits of our memory or of the auditory factor. I believe however that it is culture and not biology which shapes the human mind, which gives meaning to an action, inserting deep intentional states in an interpretative system. Culture can do this by imposing the models which make up its symbolic systems: language and manner of speech, manner of logical and narrative explanation and the models of social life with their various models of reciprocal interdependence.”73

Culture acts to shape the minds of its subjects, in order to forge and strengthen their faith. The two remaining mysteries regarding the topic are: the nature of the icon and its structure. “At the base of every icon is a spiritual experience. That is why the source of the icon can be quadruple, that is: 1. biblical, based on the reality of a word given by God; 2. portraiture, based on personal experience and memories of the icon’s creator, (…) including spiritual illuminations; 3. traditional figurative, based on oral or written communication of someone else’s spiritual experience- happened in the past; 4. revealed icons, painted according to a personal, spiritual experience of the artist himself, a vision or a mysterious dream.”74

The inspirational nature of a holy representation has several different possible origins. In all cases however accessibility of meaning is fundamental. “Accessibility is simply the deep-seated conviction that any reasonably intelligent person can grasp conclusions based on common sense and that once these conclusions have been unequivocally asserted the person will assume them as their own. (…) Common sense in other words represents the world as a familiar world that everyone can and should recognize and in which everyone supports, or should support themselves.”75