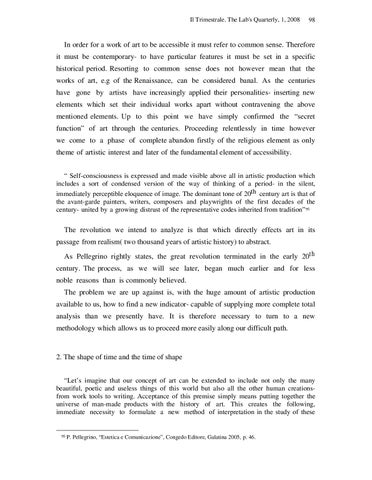 In order for a work of art to be accessible it must refer to common sense. Therefore it must be contemporary- to have particular features it must be set in a specific historical period. Resorting to common sense does not however mean that the works of art, e.g of the Renaissance, can be considered banal. As the centuries have gone by artists have increasingly applied their personalities- inserting new elements which set their individual works apart without contravening the above mentioned elements. Up to this point we have simply confirmed the “secret function” of art through the centuries. Proceeding relentlessly in time however we come to a phase of complete abandon firstly of the religious element as only theme of artistic interest and later of the fundamental element of accessibility. “ Self-consciousness is expressed and made visible above all in artistic production which includes a sort of condensed version of the way of thinking of a period- in the silent, immediately perceptible eloquence of image. The dominant tone of 20th century art is that of the avant-garde painters, writers, composers and playwrights of the first decades of the century- united by a growing distrust of the representative codes inherited from tradition”76

The revolution we intend to analyze is that which directly effects art in its passage from realism( two thousand years of artistic history) to abstract. As Pellegrino rightly states, the great revolution terminated in the early 20th century. The process, as we will see later, began much earlier and for less noble reasons than is commonly believed. The problem we are up against is, with the huge amount of artistic production available to us, how to find a new indicator- capable of supplying more complete total analysis than we presently have. It is therefore necessary to turn to a new methodology which allows us to proceed more easily along our difficult path.

2. The shape of time and the time of shape “Let’s imagine that our concept of art can be extended to include not only the many beautiful, poetic and useless things of this world but also all the other human creationsfrom work tools to writing. Acceptance of this premise simply means putting together the universe of man-made products with the history of art. This creates the following, immediate necessity to formulate a new method of interpretation in the study of these