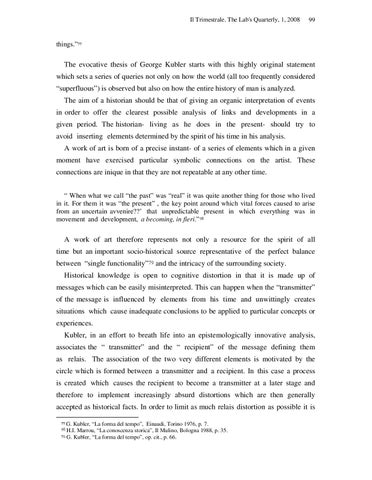 The evocative thesis of George Kubler starts with this highly original statement which sets a series of queries not only on how the world (all too frequently considered “superfluous”) is observed but also on how the entire history of man is analyzed. The aim of a historian should be that of giving an organic interpretation of events in order to offer the clearest possible analysis of links and developments in a given period. The historian- living as he does in the present- should try to avoid inserting elements determined by the spirit of his time in his analysis. A work of art is born of a precise instant- of a series of elements which in a given moment have exercised particular symbolic connections on the artist. These connections are inique in that they are not repeatable at any other time. “ When what we call “the past” was “real” it was quite another thing for those who lived in it. For them it was “the present” , the key point around which vital forces caused to arise from an uncertain avvenire??’ that unpredictable present in which everything was in movement and development, a becoming, in fieri.”78

A work of art therefore represents not only a resource for the spirit of all time but an important socio-historical source representative of the perfect balance between “single functionality”79 and the intricacy of the surrounding society. Historical knowledge is open to cognitive distortion in that it is made up of messages which can be easily misinterpreted. This can happen when the “transmitter” of the message is influenced by elements from his time and unwittingly creates situations which cause inadequate conclusions to be applied to particular concepts or experiences. Kubler, in an effort to breath life into an epistemologically innovative analysis, associates the “ transmitter” and the “ recipient” of the message defining them as relais. The association of the two very different elements is motivated by the circle which is formed between a transmitter and a recipient. In this case a process is created which causes the recipient to become a transmitter at a later stage and therefore to implement increasingly absurd distortions which are then generally accepted as historical facts. In order to limit as much relais distortion as possible it is 77