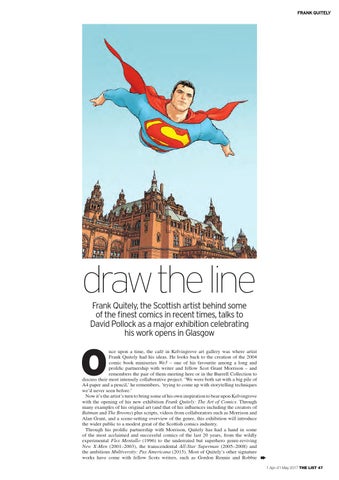 draw the line Frank Quitely, the Scottish artist behind some of the ﬁnest comics in recent times, talks to David Pollock as a major exhibition celebrating his work opens in Glasgow

nce upon a time, the café in Kelvingrove art gallery was where artist Frank Quitely had his ideas. He looks back to the creation of the 2004 comic book miniseries We3 – one of his favourite among a long and prolific partnership with writer and fellow Scot Grant Morrison – and remembers the pair of them meeting here or in the Burrell Collection to discuss their most intensely collaborative project. ‘We were both sat with a big pile of A4 paper and a pencil,’ he remembers, ‘trying to come up with storytelling techniques we’d never seen before.’ Now it’s the artist’s turn to bring some of his own inspiration to bear upon Kelvingrove with the opening of his new exhibition Frank Quitely: The Art of Comics. Through many examples of his original art (and that of his influences including the creators of Batman and The Broons) plus scripts, videos from collaborators such as Morrison and Alan Grant, and a scene-setting overview of the genre, this exhibition will introduce the wider public to a modest great of the Scottish comics industry. Through his prolific partnership with Morrison, Quitely has had a hand in some of the most acclaimed and successful comics of the last 20 years, from the wildly experimental Flex Mentallo (1996) to the underrated but superhero genre-reviving New X-Men (2001–2003), the transcendental All-Star Superman (2005–2008) and the ambitious Multiversity: Pax Americana (2015). Most of Quitely’s other signature works have come with fellow Scots writers, such as Gordon Rennie and Robbie 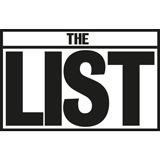